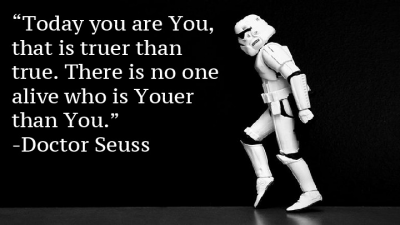 I made 1 Google slide that represents me for a project in tech class. When it was time to present, I thought that I had made a great slide and everybody would like it. I was actually very wrong and there were a couple issues with my slide. My group told me that it looked boring and it didn’t get their attention. I tried to follow the advice of Presentation Zen and use a little text as possible and I might have gone too far. I only had my name and a stormtrooper doing the moonwalk. They were in black and white for contrast and I wanted to keep that, so I had to make the words more interesting. My name was in a boring font so I needed to change it. On Google, I searched what font is used for the Star Wars logo, since I had a stormtrooper on my slide. That exact font doesn’t exist on Google, so I used another font in the same family. Another thing they told me was that just my name was boring, so I decided to replace it with a quote. Between what I have learned from Presentation Zen and my classmates, I’m sure that from now on, all my slides will be way better.