Posted by Cole Hinton on Sunday, December 9, 2012 at 8:24 am
I used a black background to let the pictures and words stand out. I chose to put visuals  of the things that I like and chose to put “ Achieve greatness”  because that it’s a quote I’ve gone by when I did sports and school work. Its  basically means to me that you can’t do anything without striving to exceed in things that are important to you and mean something valuable to your life. I put a basketball in my slide because I like basketball. I’ve played last year on my previous school’s team and I liked it. I want to do the same for SLA’s basketball team this year or next year. I put a visual of a man at a track and field starting line because I like track and running in general. I feel like nothing in my life can hold me back when I run. I put the visuals not in a proximity that they would bunch together and overlap one another. I put my words in a font that would stand out and would attract people’s attention. I wanted to align my visuals and writing equal to each other so the slide wouldn’t look shifted around. 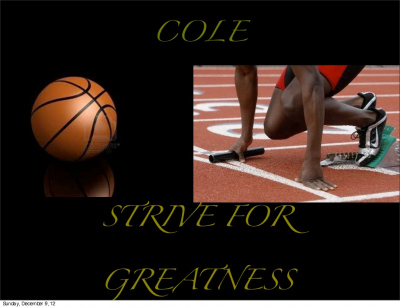