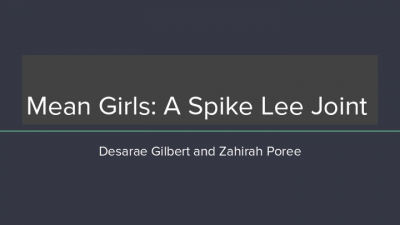 A long shot in the first scene should be used to show power in Regina's actions, the camera would the begin to start panning downward as she walks forward dropping the papers. This would give the audience a clearer image to show that she is in power and has control over the situation. A close up shot is needed in the next scene because it shows the emotion Gretchen is trying to convey to get Principal Duvall to believe she has nothing to do with the burn book. She is trying to free herself of the inevitable explosion of tension by playing dumb. This establishing shot is really important in the scene because it is the beginning of the climax of the scene where people are finding the papers and realizing what the burn book was really about. This is where the tension build-up begins. The color for the entire movie would be more reds, oranges, and yellows; more bright, warm colors would give it more of a vibrant vibe.
Mean Girls was mostly shot indoors while Do The Right Thing was more outside and into the community. Showing the unity of everyone while also showing the tensions between major characters. The tensions in the Mean Girls  would be more intense about the same issues like the Burn Book or Regina getting hit by the school bus while also building up pressure throughout the whole movie. The fight scene in the hallway of the school would be more realistic and some main point would be the climax like Radio Raheem being killed because of police brutality.

In the first confrontation between Principal Duval and the girls, we would use low angle, front-facing zoomed in shots as each different character speaks. The audience would be able to see the tensions and rising arguments that lead to the ultimate fallout scene. This allows a deeper understanding of the cause of the tension buildup and why the characters feel the way they do.  Like in Spike Lee’s Do The Right Thing, because of the camera angles, the audience was able to clearly understand just how the tensions got to the point they did. We would use a wide variety of longshots, pans, and zooms so that the angry and fed up explosive emotions of the characters can clearly be seen throughout the duration of the film.