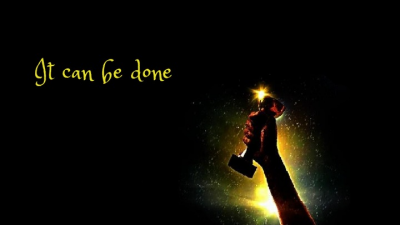 The slide incorporates all the lessons(excluding “ 8) Have a visual theme”) in Presentation:Zen at least in some level. For 7)Empty Space, I left a considerable amount of blank background color under the text as well just a tiny bit more to the right for the hand. The picture then remains balanced because it almost creates the idea that the content of the actual picture is just among the darkness rather than a huge picture here looking forced and “unnatural” where a small light is found. Both are a result of using the rule of thirds as well.  In theory, using the rules of the third I would capture each main focus point of the picture, the object shining bright in the upper right, the text in the upper left, blank space in the bottom left, and the arm coming up from the bottom right. At an attempt to line the object shining and the text up with the imaginary intersects I had to move my text up a bit from my original location as well as expand the canvas a bit to move the object. Another thing with the arm you may notice, is its bleed off the screen. I decided that an image with the entire body would take the focus of the hand and what it is holding, therefore also taking away from the text and conclusively be taking away from the slide. The text did play more than one role in the slide too, singularly the most roles in the slide design lesson. The coloring was great, it fitted in perfectly with the image(shining light and arm) and contrasted even better with the dark black. The actual sentence cooperated easily too, for the image expresses something great has been done and with the background that light can be found in darkness, but that strays away from the topic.The typing was big, reasonably big, it is readable at distance and it is sure to attract your eye before the arm in the slide seeing that it is the main idea. As the main point it also needs something to support it, and the picture did, precisely, it was easy to understand and sensible. And lastly, it is hard to dispute that the arm and hand are relatively nice to look at, it captures your eye.
One of the main problems with my old slide was with my choices with the text. Due to class discussions I came to realize that with minor adjustments I can make my slide as good as it can be. I first went to change the color of the text, to match up more with the rest of the picture/slide. Unfortunately, the color I felt best matched with it was orange, but as you may know, orange isn't the brightest  color, but I tried to make it as bright as it could go, and it didn't mess up the picture at all. Kerning the text was also a great decision in the text, if you compare it to the old slide, you can see the little decrease in the space between the words makes a big difference. Besides blurring up that top right corner of blue obvious "cut off", a rather minor difference, the last thing I did was decrease  the overall blank space. In my last slide, the amount of big space was great, and exposes no pattern and also made the picture less "attention-straining" it did become a bit excessive. I found I could accomplish the same things even when cutting out most of the black space from the top.