Growing up, I was always shy. I never spoke up or said how I was feeling. It all changed when I discovered musical theater, my gateway to music. I began to open up, and sing my heart out and express who I really was, finally breaking free from my shyness. After this, I was exposed to how powerful music can truly be. Now, music is what helps me through anything and everything. It motivates me and inspires me, and I don’t know who I would be without it.

I decided to dedicate my slide to the one thing that symbolizes who I am. A picture of a girl holding a record in front of her face symbolizes music, and also shyness. I liked the black and white aspect to keep things simple and to keep the mood calming and serious. It is a picture from Tumblr, because I wanted it to be artistic and unique. I made the font big and clear to see with varying font styles. The pink font made it pop and added a little bit of positivity with the contrasting “escape” to make that word stick out most because it is the end of the meaningful statement. This slide is simple like any good visual campaign should be. Sometimes, less is more and holds more value, but nothing like the value music holds to me.

Presentation Zen was a great source for me to use because it directed my presentation and gave meaning to it. I made the background white with a mainly black picture and bold, brightly colored lettering. I made the majority of my quote a pink color that seemed to fit my slide well. My last word, escape, which I find very symbolic, I underlined, changed the font, and made black to really stand out against the white. Presentation Zen gave the idea that having the one image used, to keep the focus simple, to have the image bleed off of the slide, which I chose not to do on purpose due to the fact my picture was a square and I liked the look better with having white bordering it. That’s my presentation! 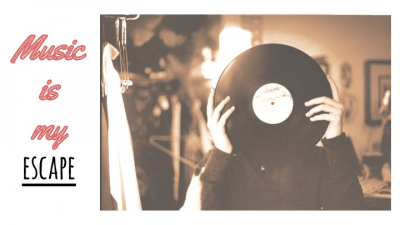