Posted by Raz Reed in Technology- Freshmen - Hull on Tuesday, December 4, 2012 at 10:42 am
For my slide, I made sure each little portion of the visual would grab the viewer’s attention with big things. I made a picture of outer space as the background, so as to make it not only a big image, but an image of something big. I added an image of the earth in front of this background, bleeding off the edge to make it seem interesting. Its placement was important, because it helped to add depth and left lots of empty space. Finally, I added some text at the bottom of the screen to show what I had learned - “BIGGER IMAGES get your point across.” (In fact, that capital letter text was probably what you saw before you read this.) The first part of the text was bigger so as to easily communicate the subject to the reader.

Reflection: I realized the colorful background detracted from the earth, which was supposed to be the focus of the picture. I changed that by adding a different picture of space as the background, one much clearer and allowing for the earth to be noticed more. I also made the text just a bit bigger. 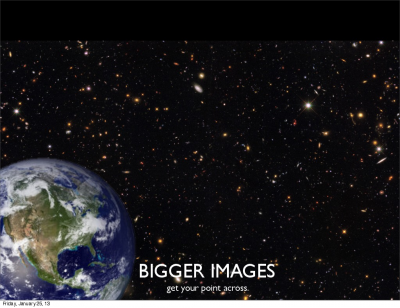 I noticed how you made the slide one big picture. I wonder why this is not more about you. What if you posted a second slide.

I noticed that this is very clean cut and simple