In Born a crime a few things connected with my writing that influenced the story. A few examples would be when Trevor Noah had a close friend named Teddy, and when Trevor Noah had wanted to switch classes when he liked being in class B better than class A. In both of these stories they have something in common, both Teddy and class B accepted him for who he was. Both of the people accepted Trevor Noah for who he is and made him feel part of a place where he isn’t judged. That is the same with my friendship group, they accept me for who I am regardless of my flaws. One of my favorite quotes in Born a Crime was in chapter 11 on page 99 “Since I belonged to no group I learned to move seamlessly between groups. I floated. I was a chameleon, still, a cultural chameleon.” This quote did connect to me, this connected with being because growing up I was also the same way. I was part of multiple groups but it didn’t feel like I was part of it. I was there from time to time but I never stayed for too long. My friend group and the habits aren’t the easiest to understand, sometimes we can’t even understand each other but that is a rare occasion. I tried to explain the characteristic traits of my friends the best I could to make sure they understand the way our group works. My friend group can get chaotic sometimes and when we are having a serious conversation about things that are affecting us we have each other’s backs. Identity and belonging haven’t always been the easiest thing growing up. I never really had many true friends, they were more of acquaintances. Growing up, we all kind of just lacked friends. So eventually we all became friends even though most of us attend different schools. The story connects with my identity because my friends influence how I am towards other people. While writing the book Trevor Noah’s very impactful writing style, it’s unique in many ways. His writing style had lots of humorous moments which also makes me want to add a lot of humor into my writing style. I am attempting to give my story a comedic effect.. I also want to make it as entertaining as possible. I adore humor, first because I like making things funny and laid back. I don’t like making my writing stiff, I like to have my personality intertwined with the writing. 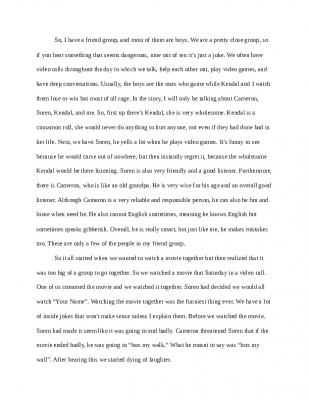