This paper is about the way that musicians, rap artists especially, use their words to influence their fans. I think this is important because everyone loves art and it is extremely important for people to share their thoughts and art. The way that rappers use literacy and change it up to tell stories is amazing and I find it very important just because they are able to inspire and influence their fans with their music.

I once told my English teacher to “Shut the fuck up”. I do not know if you have ever been pushed to the point that you had to do things that were out of line but I have. At the time I was some depressed little kid whose new days were just a copy of the previous one. I wanted and needed something to happen so I looked for the opportunity and when a career discussion came up I thought that I would be able to shock the rest of the class with my goals. “I want to be a fashion designer” I said. I then talked about my role model Kanye West and how he has inspired me to be different. They laughed and the teacher told me that Kanye West was such a ridiculous man and I should never try to shoot to be something that I can’t do. I think he was just trying to “be real” but I found it being one of the most disrespectful things someone has ever said to me. So, in a calm but apoplectic voice I said “Shut the fuck up. You’re a teacher…a teacher that is putting his stress and hate on his students. I don’t appreciate what you said and if you really think that then I guess I will grow up to be such a ridiculous man as well but at least I’ll be more paid than you are.” I was told to leave the class immediately.

Everyone is influenced by certain artists who are considered their icons. They use literacy in such a way that creates pieces or songs that are just perfect to certain listeners, viewers or readers. Literacy is universal. Every culture has their type of literacy that shapes and defines who they are. It is in our arts, it is in our schools, we speak using words, our world runs on math, science, and literacy. In music, literacy is expressed in multiple different ways. Also, artists all around the world have different fan bases who are influenced through the music that the specific artist creates. For example, rock or metal fans would speak and act a different way than hip hop/rap fans speak or act. They could also influence fans to do things that are out of their comfort zone and or raise their confidence.

Kanye West is my biggest influence by far and because of him, I can say that I talk, act, and dress differently from other people. West, 38, once said before that his “music isn’t just music — it’s medicine.” Like other fans of artists, I find things like this true. When you are influenced by someone as much as some fans are by their favorite artists, they vouch for what they say. They also take the information and change themselves because of it. For example, if a rapper states that they go to a restaurant every Friday, many of his fans might be influenced to visit that restaurant just because they believe that is what is the “cool” thing to do. As a person who is heavily influenced by West, I would not say that he influences me because he is famous and I want to follow him in order to be cool like he is.... I would say that instead of following him, I am learning from him. The masses do not truly understand the difference between following and learning and that is why some fans who are influenced by artists who do bad things are most likely to do bad things as well and that could be a problem.

Not only do artists influence the way people act but they also could influence the way they talk or the way they dress. Rappers specifically, use different types of slang words depending on where they are from or what they represent. For example, over the years rappers have used words like “jawn” to “trill” to “bud” as slang words to replace actual words for the sake of rhyming, for fun, or to replace the names of drugs. The way certain musicians speak has such a big influence on fans and a lot of times, fans do not even notice that the way they speak has changed. One big influence is A$AP Rocky. Rocky is a younger artist who has grasped the youth and influenced the way we speak and dess. He has brought words like “trill” and “jodye” to the world of slang and although he impacted the New York youth scene the most, kids from all over the world have been heard saying words that he has brought into the game.

It is believed that what artists (rap artists) wear has the most influence on the fans. Fashion is such an important subject in society and almost everyone does not realize how influenced they could be when it comes to fashion and style. Since the beginning of rap, fashion, streetwear especially, has been talked about and has influenced popular culture even to this day. From Notorious B.I.G. and his Coogi sweaters, to A$AP Rocky and his Raf Simons and Maison Margiela, to Kanye West in Haider Ackermann and other high fashion clothing, rappers have dominated pop culture influence when it comes to fashion for the masses. Kanye West is a perfect example...because of him people from all over the world have taken more notice to high fashion brands like Givenchy, Marcelo Burlon, and Haider Ackermann. We also cannot forget that every sneaker that has been designed by Kanye West has sold out in less than two hours upon release. Not everyone listens to hip-hop but everyone does wear clothes and when people see rappers wearing the clothes that they are, they have to have it because this person might be their idol or they love the piece. When people see each other wearing certain pieces, the influence spreads and artists themselves become trendsetters. I believe that fashion has the biggest influence on fans (besides the music) just because it has been relevant since the beginning of the idea of popular culture. Rap artists are not the only ones that have influenced their fans either. Musicians in every genre have set trends for their fans over and over again and that is why music and fashion go so perfectly together.

Music being the influential tool that it is, has been around for decades and decades. But not only has the music inspired people but the artists themselves have inspired and changed the listeners every since popular culture has become a more relevant subject in society. Artists have influenced people’s speech, attitude, and fashion sense and it can be said that this will happen for as long as people are able to express and share their art. 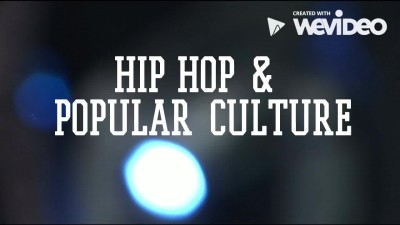