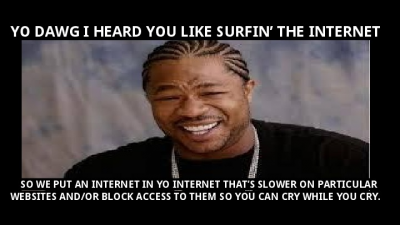 Net neutrality is basically the principle of an open internet, in which all data is treated equally, being sent and being received, concerning what you have access to and the speed it is accessed (actual internet connection issues based on location or other variables aside). The thing is, though, that having net neutrality in place means that ISPs (Internet Service Providers) cannot take in more revenue by charging users for access to certain sites or faster speeds whilst using them. Of course, this leaves them upset. Recently, the FCC (Federal Communications Commission) have started to ease away from net neutrality, with certain policies being put in place and such, but it's not a complete change. Although, this doesn't mean it isn't possible to do so, and every teen should be aware of what would happen if there was.

Say, net neutrality wasn't in place anymore due to some FCC regulation and you're really bored today. So, you hop on the computer, search up on Netflix and...waiting. ¨That's strange,¨ you'd think, ¨This never happened before...¨ Suddenly, a window pops up on the screen trying to convince you to pay for Comcast's new ¨fast lane¨ internet service. ¨Well, my internet is pretty slow...¨ So, you go ahead and pay for the ¨fast lane,¨ hoping it'd help you out. ¨Hey,¨ you'd think, ¨This internet connection is exactly the same as it was before the FCC's new regulations!¨

Huh, it makes it seem as if ISPs are using their control over your internet in order to make a quick buck... If net neutrality is left behind, then that means companies limiting your connection and access to certain sites based on either how much you pay them or how much that particular site's owner pays them. They believe that since it takes too much money to have giant piles of information piling in from huge streaming sites like Netflix, we should pay for it, even considering that people are paying for internet in the first place! And I know y'all teenagers love your Netflix, so this is serious business. This is a matter of the freedom of the internet and how you experience it, so it's important for all teens who regularly use the internet to truly understand the idea of net neutrality and what's up with it.