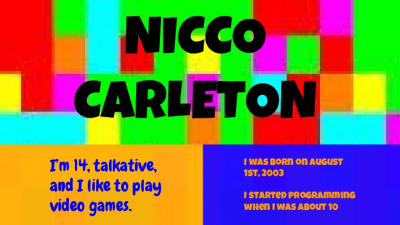 ​So, originally, I thought the first slide was awesome. It took some constructive criticism for me to figure out how I could make it better. Everyone thought my slide was overly disorganized, making for a hard-to-understand slide playing with the viewer's attention. I fixed that.
First, I tried organizing the slide by straightening everything out. There was still something missing at that point, however, but I remembered Ms. Hull said it'd be a good idea to make opposite-colored rectangles. I thought it was a good idea, as it would make the text easier to see and decrease the insanity (that I still want to keep alive) and put them behind the text. It looked much better, but I decided to make them slightly transparent, to hind the background behind it.
I mainly used ideas from zachholman.com, as the slides presented in the blog were very eye-catching, in my opinion. I made everything big and bold, but for the remixed version you see above, I used more ideas from presentationzen.com, to deal with the "clutter", inspiring me to use the rule of thirds (in some part, anyway) and to increase contrast to make things easier to see. I think I've learned a lot about making presentations, and I think it was fun making this.