Posted by Noah Caruso in Technology- Freshmen - Hull on Sunday, December 9, 2012 at 8:42 pm
In technology class, we discussed using slides and signs to effectively get a point across. We also talked about how these same slides and signs have affected our culture today. this slide shows everything in the world that makes me who I am today.

Many decisions had to be made about putting these pictures into place. I modeled this slide off of the Ikea advertisement with the cups. The cups had a nice contrast to the black background and the empty space made you notice them. I also used a black background with mostly white symbols to contrast the background. I kept a lot of blank space so you had no other choice but to look at them. The reason one picture was a different color is because I wanted your eyes to go there first. I wanted it to pop out at you so your eyes would start at the top, most colorful image and work your way down until you reached the bottom and realized that it spelled my name. Too much negative space, however, is a bad thing. I put another image that represented me in the negative space but made it slightly transparent so it wouldn't create
much of a distraction for your eyes. This slide explains me through pictures, but without pictures of me. It explains me without words. 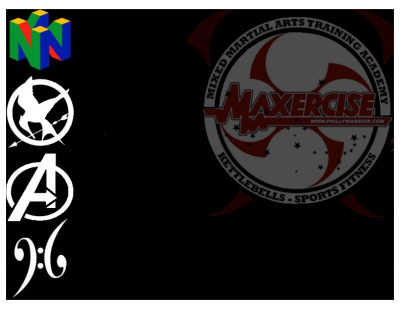