Posted by Olivia Mack in Technology- Freshmen - Hull on Thursday, December 6, 2012 at 4:50 pm
On my slide I put things that I like. I put my name right on the top because the slide is about. I wanted to make a collage at first, but I didn't want it to be too much so I only put some pictures. I tried my best line up the pictures. I didn't want it to look sloppy. When someone put there eye's on it I wanted them to look at my name first, then they look at the pictures from left to right. My background was colorful so I made the color of the letter in my name white because of the contrast. You don't want too much color. Also, the letter's are really because I wanted to fill most of the slide.

My decision making for the design was influenced by Tumblr. Tumblr is a blogging website and the theme for your blog looks similar to mine. On the top there would say things and on the bottom on the page there would be pictures of things you like or just basically anything. That part of the design really influenced me because I think that Tumblr is one of my favorite social networking websites. To incorporate that into my slide as a design really shows that.

I kept mine the same because I didn't go up. I think that according to the feedback that other people got that mine is fine the way that it is. I made the pictures straight as I possibly could. Also, I think that the contrast within the slide was pretty good. 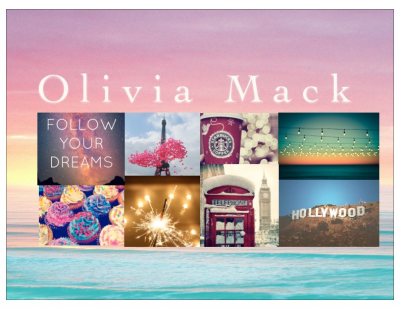