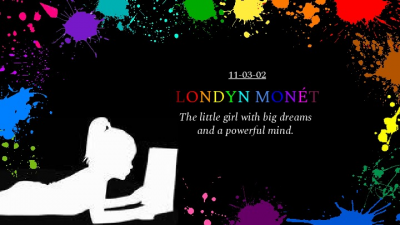 From the critique of my slide, I learned that since I am the creator, only I know what I want to grab the audience’s attention. I also learned that images get distorted sometimes when being shown on a projector in comparison to a computer screen so I should be careful when enlarging or minimizing images and text because it may make things be grainy or go unseen by the audience.

To remake this slide, I first remade a version that had my original background and text color but with more paint splatters as a border. I then decided to completely remix my slide so, I inverted the colors making the background black and the words white. It was suggested that, to catch the eye, I should make my name multicolored so, I did so. It was also suggested that I make my quote bigger so that the audience can read it since it was put on the slide for a reason.

I think the research helped me make a better slide because it showed that there are many different ways to interpret information and in order to convey the message you want, you have to catch the eye of the audience. I would also consider my classmates’ presentations research because I could see the things I liked about a slide and the things I didn’t like about a slide and I could see common mistakes that were present in my slide as well as theirs. For the most part, I used the given resources, google and advice from my friends to create a good slide. I used the ideas of eye catching colors, the rule of thirds and other advice from classmates/friends to formulate a new and improved idea for my slide remix.