In my last Blog Post I mainly discussed Online Predators. In a nutshell Online Predators are people who commit child sexual abuse that begins or takes place on the Internet. This needs to be brought up and have more awareness for many reasons. One; most children are not educated or not educated enough about this topic. If we could teach kids how to be safe Online, there would be a lot less of this crime going on. Two; some parents are not educated enough in this field. If more parents knew the signs of a predator, then more of these instances can be avoided or cut off before it goes out of control. And finally; our society is mostly based off of modern technology. This allows Predators to stalk in the depthness that is the internet and can get away scott-free. If we educate and teach more individuals about this issue, more events like these can be stopped. There has been cases where some police units are trying to bring up awareness, however it is not brought up enough on a global scale. So what are some of the signs of an Online Predator? According to the Washington Police there are several tricks Online Predators use including, but not limiting to; chatting privately, flattery, intimidation, asking for personal information, and sympathy. The main way predators lure in their victims is by ‘grooming’. “Grooming is how online predators manipulate children into meeting in real life with their sole goal of having sex with them. Predators will spend weeks, months, and/or possibly years "grooming" their victims before asking them to meet in real life.”

To find out how much our students actually know, I gave out a quick survey regarding Online predators. The first question was seeing if students can define the term Online Predators.

These are just a few responses from the survey results.

As seen above, most responses were correct, however there were some questionable ones. “Predators Online.” was one result. So this topic is brought up, but not to the extent people should know about.

The next question was if you actually know the first signs of a predator. 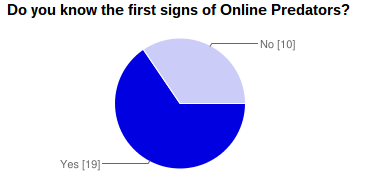 As shown on the graph, many people answered yes. However I asked them for specifics. Most people in fact did not know the first signs which are chatting privately, flattery, intimidation, asking for personal information, and sympathy. Participants stated that the first signs were asking to meet up or pictures. These are when the Predator already has you in their grip. So this means children are being taught what the most noticeable signs are, but not necessarily the first red flags.

We also have to be wary how much time children these days spend on the internet. 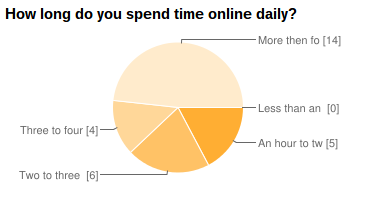 Because our generation spends so much time on the internet, we are easier targets. In fact most of the students claimed they were contacted by an outside force on the internet.

Overall I would say my findings are what I expected. Kids know about it, but not enough. Which is why my Agent of Change ideas can bring awareness to this subject and teach the full extent of this issue. I plan on giving a detailed presentation about this subject. I have to still work out the kinks on this plan. I was also thinking on hanging posters in our school and outside to bring awarness.