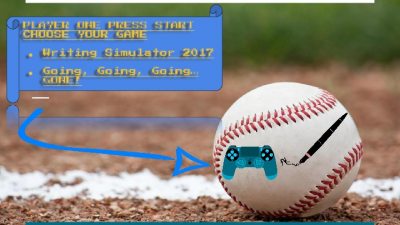 I knew from the start that my slide was not going to be perfect, but I was prepare to handle any critique that was thrown at me. While I was presenting to my small group, the critique that everyone gave was constructive and resourceful. From their critique, I learned that everything could not be interpreted the way you want it to be. For example, in my slide I put a feather and ink as a symbol my for passion of writing, but Doug suggested that people may not what it means or what it is in the first place. I also received criticism for my placement of arrows, pointing out that I was taking away emphasis from one part and focusing it all on another and instead suggesting of balancing the ensemble of visuals correctly by connecting them. Finally, Jacob P. pointed out that my video game controller lacked depth and felt like it was “not up to par” and suggested I use a more modern representation of the video game controller. His final comment was that the color scheme threw off the balance of the slide and created discord.

In my reworked slide, I made those changes so the finished product will look more urbane and polished than the first time around. Instead of a feather and ink, I replaced it with a fountain pen writing some words so it could be interpreted as symbolism for writing. I also changed the arrows completely; instead of having a circle of arrows focus on the baseball I connected the “Choose Your Game” visual to the baseball just by using one arrow, which shows that they are connected in a way. The one arrow also makes it superior to the previous arrows, because that way there is less clutter on the slide to open up more room for empty space.

The research I did helped me create a better slide, by introducing me to terms I’ve never heard of before. Things of rule of third and empty space creates a visually appealing slide that reduces the amount of things that your eye has to see, allowing the information being processed to be quicker and faster. Previous elements such as texture, color, and lines that I had a basic understanding of before, I became more advanced in those specific areas. Not only this research allowed me to efficiently finish the project, it will also allow me to create future presentations that will be aesthetically pleasing. Finally, I’ve learned that I should keep it simple and not to overkill the design. In fact, while researching I found my new favorite quote that is a homage to what my design is like; “Simplicity is complexity resolved.”  Various resources across the web were helpful in the creating of this slide. Some resources included Presentation Zen, pictures of IKEA advertisements, and various videos on Youtube.