Pleasure May Not Always Be The Right Pleasure

Comparing “Taming of the Shrew” to “Deliver Us From Eva”

In the book “Taming of the Shrew” Katherine is one of the main characters is somewhat unfriendly and is completely shut off with the idea that someone could be in love with her. She is a  in the book and seems very closed off to love and anything that has to do with it.  Many people believe she is evil and a “shrew”, thus the name of the book. A very confident Petruchio tries to woo Katherine into marrying him, which may seem impossible, but works out at the end.

In the 2003 movie “Deliver us from Eva”, the main character Eva, played by Gabrielle Union, has a lot of similarities to the main character in the book, Katherine. The plot of the movie is mainly about a woman named Evangeline Dandridge who is uptight and mean to her sister`s spouses. In order to get them out Eva out their hairs, the husbands get the town`s player Raymond played by LL Cool J, to go out on a date with her for $5,000. All goes well, but the plan is skewed when Raymond actually falls in love with Eva.  One similarity is that many people believed that Katherine was evil and that many people believed that someone needed to “tame” her. Although there are lots of differences, such being that Katherine was never in love with someone prior to falling in love with Petruchio, but Eva was once in love before falling for the movie character, Raymond. Petruchio is being compared to Raymond  who is payed to go out with Eva in the movie but seemingly falls for her in the end. This is the same that goes on in the book, although Petruchio knows he must marry her in order to get the dowry, and Raymond must try and go out with Eva in order to get the $5,000. In these two love stories, it shows that even though many other parties try to interfere themselves in the relationship, the two parties have to be the ones that are truly involved with each other in order for the relationship to succeed.

In this scene the three husbands, Mike, Darrell, and Tim have just been kicked out of Tim`s house for watching football. In a prior scene, Eva made them get out after saying this whole speech, just to basically say get out. They think that Eva is so mean and they dislike her so much. She controls their lives and make them feel like they are being controlled. The reason for them being kicked out is because Eva and her sisters needed the room to do a book club meeting. The three husbands had to go to the bar instead. While they are there, Mike  sees an old friend (Raymond) who they think can woo Eva to get her out their marriages. They have a little discussion in the bar and come to an epiphany that Raymond may be the one to get Eva out of all of their marriages. Mike even continues and says “This can work with Ray, the boy is a specialist, he is a master player.”  In comparison to Petruchio, Raymond is in it for the money at first. They both want to woo a lady who obviously has a hard time letting people in. On the contrary, Petruchio has to marry her for her father`s dowry and all raymond needs to do is go out with her a few times to get a couple thousands dollars. Which connects to my next quote from the book.

Tranio says “Ay, mistress, and Petruchio is the master, That teacheth tricks eleven and twenty long. To tame a shrew and charm her chattering tongue.” (Act iii./SC 2/ Line 213-20)

Tranio, Gremio and lucentio can all be compared to Mike, Darell, and Tim, the husbands who need Eva to date someone in order to get her out their hairs. In this scene Tranio, Lucentio and Bianca are all having a conversation about how they have someone for Katherine. At first Bianca is hesitant, but Tranio assures her that he is good and will marry Katherine in a day. In comparison, Gremio and Mike are the characters being compared because they try and find someone that will woo Katherine. They make sure the person has experience in basically charming women. In contrast, in the book, they involve Katherine`s sister in the conversation to let her know, but in the movie Eva`s sisters never know about what is going on with their husbands are doing. They know about Raymond, but never know his true motives. In the book, Bianca doesn't know Petruchio`s true motives either, but knows that Gremio and lucentio are trying to find Katherine someone that can woo her, so that she can get married, and eventually Bianca can then get married. This flows into my next scene to connect more with my thesis. 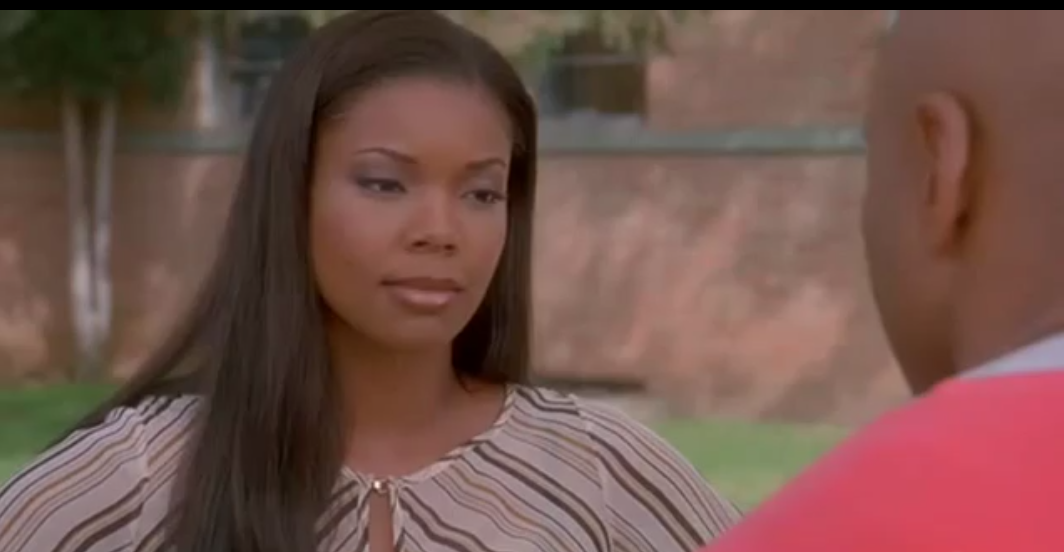 In this scene Ray is outside of Eva`s job, because he is trying to convince her that he is the one for her and to let him in again. The reason that it is the second time that Ray is trying to be closer to Eva is because Eva found out that he was doing a bet on her the whole entire time and that he wasn't truly in love with her. Although Ray claims that he was by saying “I am never, ever going to find another woman like you.” As you can see Eva is fed up and is now closed off to anything that Ray has to say. This compares to the book because Petruchio, also tries and say something like this to Katherine and makes her feel that he really and truly wants her. Both Petruchio and Ray, seem to use their words wisely into charming these women, Katherine and Eva, so they can ultimately be together in the end. On the contrary, Petruchio never ever reveals to Katherine that the only reason for him wanting her is because he wants her father`s dowry. Petruchio only commits to Katherine because of the money and Katherine never knows that. Ray tells Eva, thus making him pushed more away and for Eva`s wall to be back up. This leads up to the next quote from the book.

Katherine says “Nay, then, Do what thou canst, I will not go today, No, nor tomorrow, not till I please myself. The door is open, sir. There lies your way. You may be jogging whilst your boots are green. For me, I`ll not be gone till I please myself. `Tis like you`ll prove a jolly surly groom, That take it on you at the first roundly.” (Act iii./SC 2/ Line 213-20)

In this quote Katherine is basically yelling at Petrucio telling him that if he doesn't love her, he can leave. She feels that she needs someone that is really going to be there for her, as to anyone who wants to be in love. In comparison to the movie character Eva, Katherine also explains to her lover that if he is not here to lover her  then they can stop wasting their time and get out their life. Both Ray and Petruchio have had to make their mark to woo these two women. In contrast though, Petruchio walked out right before this scene, which is the reason for this quote. Ray never stopped trying to charm Eva, but was always persistent. Petruchio was not very persistent, often putting his confidence on a 10. 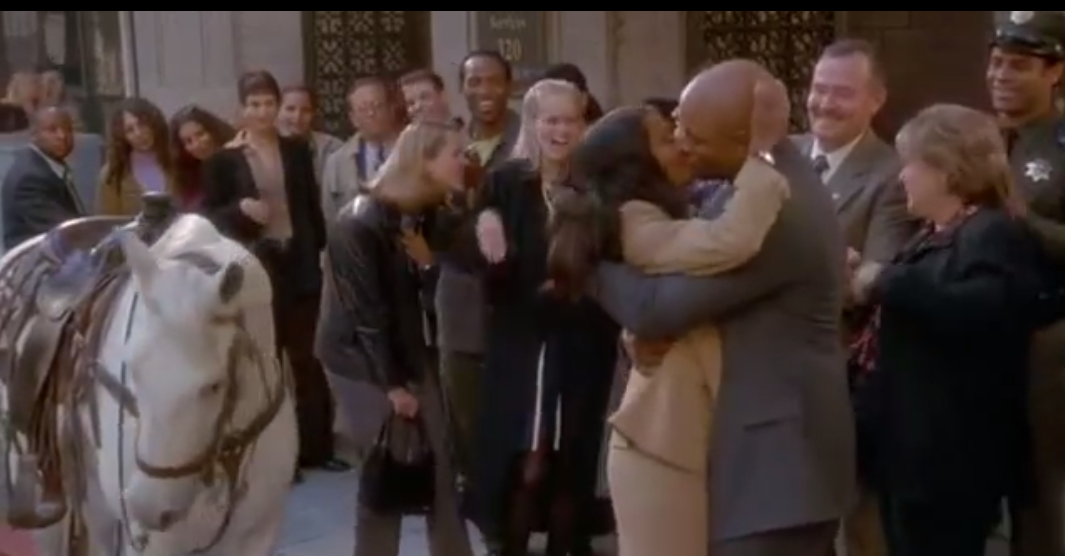 In this end scene, Ray just confessed his true love to Eva in front of everyone at her job. Eva had been lied to and put Ray in the doghouse. In order to woo her finally, Ray had to really show Eva that he loved her, and that was by buying her a horse that she always wanted as shown on the left in the picture. In comparison to the book, both couples ended up being together and either one of the parties confessing their love to their partners. Although in contrast, in the movie Ray confessed his love to Eva in front of all her co-workers, on the other hand in the book, Katherine actually confesses her love to Petruchio in front of all their family and friends. This may be kind of shocking, go off that in the book, Petruchio was the one that was supposed to be charming Katherine and saying that he loved her, but Katherine confessed her love to Petruchio, which was the moral of the title, “Taming of the Shrew”.

This is a later scene,when Katherine has just confessed her true love for Petruchio in front of all her friends and has in a way been “tamed”. She says how she will be by his side and will do as a wife is supposed to. Comparing this to the movie, Katherine and Ray are very similar, in that being that they both tell their lovers that they surrender themselves into loving them completely. Also both Petruchio and Ray are the ones to finally grab their women and say “kiss me”. In contrast Petruchio's tactics are still to get Katherine`s dowry, but Ray has completely dismissed that notion and only want Eva.

Ray and Eva and Petruchio and Katherine obviously all have something in common, they all want something. Weather it be love or money. In the beginning the road is rocky and it seems that the men in both texts are trying to charm the woman, but in the “Taming of the Shrew” Katherine is the one to confess her love to Petruchio. Interference from outside parties may not always be the right thing to do when it comes to relationships, because it`s up to the 2 original parties to truly feel something, even if it`s not there at first.