What i liked most about this project was the use of information I had foreknowledge of to create a future i wanted and believed to be possible if my point of divergence actually happened. The most challenging aspect was finding the original primary source documents as bruce Lee the man it centered on was only in the main stream stop light for a very limited time before his death. A lot of information pertaining to him was secondary accounts or stated after his death. The most interesting event I investigated was the effect of implementing cash incentives to entice people to do what was for their own good which delved a bit into making people do what is good for them and a bit of a moral debate of whether it is justified to do so. My project had an extreme impact on the historical record which is quite impressive. The changes one person can make influence the entire world especially the actions of some one who is a great motivator. Systematic change impacts the historical record because the historical record is nothing more then a list of the systematic change that occurred and the reasons why they did. Ones decisions can drastically effect the historical landscape because people in great positions of power set up the goings on for there time which can set president for the future and also become a part of the historical record. This project might be able to be improved with a bit of intricate photoshopping to add my dead protagonist into scenarios past when he died in the real historic time line. I would start working on the primary source docs sooner if i had to start over again. 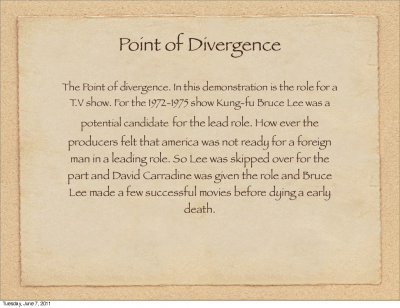