My element is radon, and its atomic number is 86. Radon is colorless, odorless and tasteless. It is used to cure cancer and predict earthquakes. It was discovered in 1900 by Friedrich Ernst Dorn while he was studying radium, though it wasn’t called radon until 1923.

I chose this imagery to represent radon because when I looked up radon, the toxic/radioactive symbol came up a lot, so I decided to do a geometric twist on it, with a circle in the middle and curved shapes surrounding it. The process to make my print was extensive. FIrst, I had to research radon in order to come up with ideas for my print. I sketched a lot of very different things but eventually landed on my current design. Then I made a final 6 by 4 drawing of my print, and transferred it onto parchment paper. Then I carved my design into foam, and finally I rolled ink over it, pressed it onto paper, and cut it out.

If I were to do the print differently a second time, I would have made the lines I dug in thinner. Since I had such big wells, everytime I pressed down another piece of the part that was not supposed to get ink on it would be lifted up. When I actually printed it, There were crevices that should have been filled in that were not, or places that shouldn’t have had ink in them that had. I enjoyed the sketching of print ideas the most. I liked it because it was a very laid back class and we got to think really creatively about it. 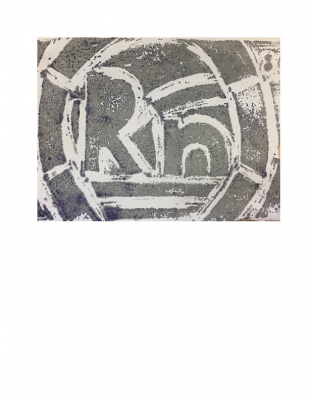