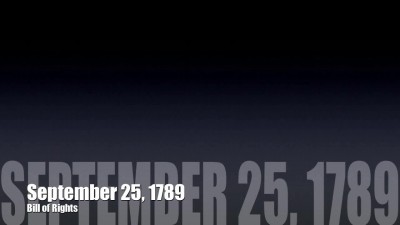 I chose this topic because when I was looking for topics, this one stuck out to me. It interests me because it actually affected me personally. From the beginning, I wanted my topic to have something to do with high schools students, considering that is what I am. When I saw this topic and looked at the amendments, I knew that this was going to be it!

I liked that fact that this project was a documentary. I am currently in a documentary class, where I learn a lot about how to create documentaries, edit and film. I was able to use the skills I have attained to my advantage. Since, this wasn't so much of a creative project because Cspan told us what we needed to do and what it needed to be about, I was ready to go at it, in the proper way.
I think the most challenging thing was getting the answers we wanted from people's interviews. We expected people to say certain things that they did not say and some were not as useful as we hoped. Therefore, it was becoming challenging for us to try and convey the message that we were intending for the audience to get from the video. It was also challenging to get interviews, in general. At Ben Franklin, we weren't allowed to film some interviews because the principal would need parental consent. THEN we couldn't even find enough Cspan footage! I honestly don't know how they don't have more useful footage about the 4th amendment and high schools because it is an important issue that all students should be aware of.

The most interesting event that I investigated had to be the metal detectors. SLA does not have any and are the only public high school in philadelphia to not have any. I went to Central High School and had to go through metal detectors as a freshman. I was confused and scared because I honestly didn't think that one of the best schools in Philadelphia would have their students going through metal detectors, as if we're at an airport, in which TSA has tightened their security checks due to a terrorist attack. When I went to Ben Franklin and interviewed students about their thoughts of it, it was interesting to hear different opinions. Some students didn't think much of the metal detectors while others felt violated. SLA is so different from other high schools. I thought it was just based on the way we learn but it really isn't.

We could improve this project by definitely getting an interview with Mr. Lehmann and by using outside videos. There was not much CSPAN footage of our amendment at all pertaining to our topic so if we could use other educational videos in our project, it would be better. Besides that, I really enjoyed the project and my partners. We all brainstormed a lot of ideas and really put together a list of good interview questions, so that we could find what we were looking for. I learned a lot about the 4th amendment and how metal detectors could violate that right, but it all depends on the person. If SLA were to get metal detectors and have random searches, it would change the whole vibe of the school. While as, in Ben Franklin, Principal Johnson would rather have them, in order to keep his students safe so that he does not have to make "that" phone call. That is not saying that SLA is not safe, because it is the only school I actually feel safe in.