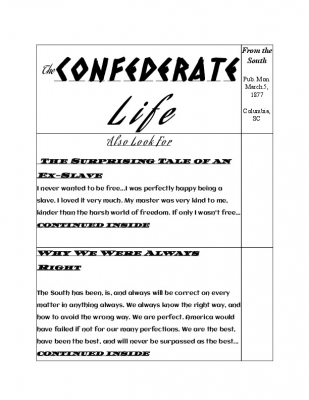 MAKE SURE YOU CLICK ON THE PICTURE TO SEE IT ALL.
Artist Statement:

Hello I am Asher Swartz, creator of the fictional "The Confederate Life" newspaper. This is a fictional newspaper set in the Reconstruction period following the American Civil War. A brief overview of the contents of this fictional newspaper (brief disclaimer: I do not inherently agree with the viewpoints expressed in these articles and this newspaper. They are merely fictional ideas I wished to express.): It is called The Confederate Life (as I'm sure you understand by now) and it features two main, one age long each articles. One is titled “Dirty Carpetbagger” (carpetbaggers were northerners who moved to the South after the American Civil War to benefit financially) and the other one is titled “Honorable Gentleman”. These are articles written by someone very mad about the American Civil War and Reconstruction in general and is venting their anger by writing newspaper articles promoting Southerners and bashing Northerner carpetbaggers. They each contain quotes from a main person. The Northerner is Marshall Harvey Twitchell, a Civil War veteran who lived in the South, a self proclaimed carpetbagger. The Southerner in question is Edwin H. McCaleb, a supporter of the Confederacy. The quotes are from an autobiography for Twitchell and a letter to a friend for McCaleb. The articles use these quotes, and the author rants on about this that and the other thing. End of summary. Now, there may be some points that cause some form of confusion for some readers, and I would like to clear these up. First, there are only two main articles. Everything else is for context. Secondly, once again, this is purely fictional. Everything besides the quotes themselves is completely made up. To finish up, I will tell you why this is important. Even though this is fictional, it is a representation of something that might have existed. Its just an example of how people might have thought.

​Here is the link to my source analysis. It also has the Artist Statement
https://docs.google.com/document/d/1DRvBlaMc-1KMmq5xvXaicuLqmfky792F0dqJUAa1y2c/edit