This is a newspaper that was published on the day after Lincoln’s funeral. To be clear, Booth escaped and was tracked  down on a farm in Virginia, and that the police who were suppose to protect Lincoln was in a nearby saloon with Lincoln’s coachman.  This is suppose to be a newspaper that would teach people about what happened. This newspaper includes how Lincoln was killed, what are the elements of this tragedy, how people mourned the death of our great president Lincoln, and many more. It also talk about the problems Andrew Johnson faced as the president at the time of period. Lincoln was a great man, he had done a lot for Black peoples, he signed the Emancipation Proclamation, which freed the slaves, and he end the war of slaves too. He also start the reconstruction right after the war, giving every African American forty acres of land and a mule / 100 bucks to build a house. He affected the African American, and his death affected them even more. His death stopped reconstruction basically. Andrew Johnson was the president after Lincoln, he didn’t care about reconstruction as much as Lincoln did, and he have lots of stuff to deal with. Like the southerners protesting about the African Americans, African Americans in the congress and etc. Anything He done could have affect the African Americans’ position in society, not only in the late 1800s, but also in the 1900s, and now a day. If the issue was take care of even more properly, may be here won’t be as much case of white cop shooting or killing black peoples for basically no reason, like how it is now.
P.S. I forgot the title for every articles, so I have a chart for it below. 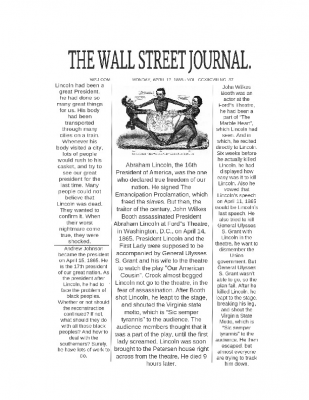 I once read a book about the 12 day chase for Lincolns killer and I think it showed a lot of these different aspects, although you did give really good original perspectives.