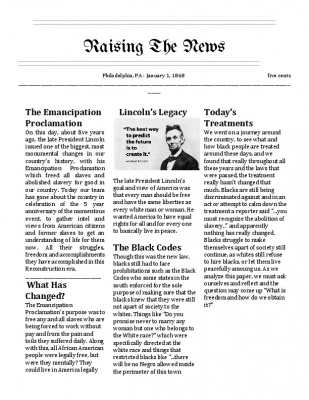 Artist's Statement:
My newspaper is a paper that was published exactly on the five year anniversary of the Emancipation Proclamation. It follows the struggles that blacks had to endure after the Emancipation Proclamation. It begins with the actual meaning of the proclamation, followed by a quote from President Lincoln at the time, and concludes with quotes from former slaves. I wanted to include a quote from Lincoln that I thought was really important and was crucial to what was going down at the time and embodied what an intelligent, devoted president he was.
https://docs.google.com/document/d/1_DdWNBLWJaHd1cxi0jQn7GKxWEfH6ywFHfFbJ-E9ZE4/edit#