Posted by Taylor Green on Friday, December 11, 2015 at 11:46 pm
For my first slide, the majority of critiques I received was mainly about how I had too much going on in one thing. People said that I should've stuck with only a few pictures or just go ahead and make a collage. People also said that having photos of myself was redundant, since I was presenting.
For my second slide, I decided to just use one picture of my favorite singer, Lana Del Rey. She has inspired me to do a lot and I wouldn't be the person that I am today without her. I decided to put words that described me on the right side of my slide instead of all around because they would be too distracting. I also decided to stick with a black and whit theme, since it's really simplistic, yet interesting. I didn't use a default template as my background because they lack originality. Instead I made the entire background black and out in a black and white photo and made my words a white font.
The reason for the words on my slide is because they are all things that represent me. I am all of the things that are posted on my slide. 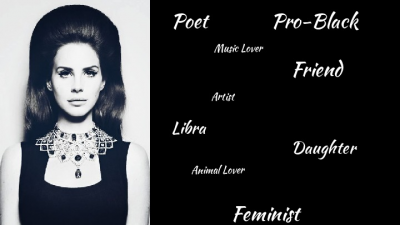