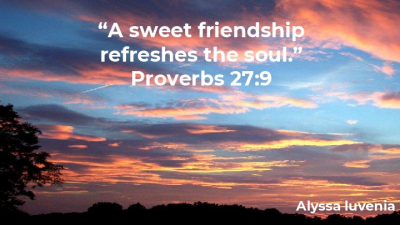 I learned a lot from the critique  that i was given. My first slide was very distracting, and the images that I put on there were also distracting and clashed with my background image. One of my friends pointed out to me that I did not have a color theme and that having a theme might help so that my slide is less distracting and conflicting.
When i was thinking of doing my new slide, I wanted to make it a much more simple, but still with something important to me on there. I thought...what is  one of the most important things to me and I thought of my faith and my friends. So I chose a bible verse about friendship. I wanted to make the colors pop, so i bolded them and put them in white so that it would really pop off of the background. I put the bible verse in the top center because that is the focal point of my slide. That is the thing that I want people to look at and read first.
The research that I did helped me to realize that I needed to make a simple slide. I needed to limit the colors that I used so that they did not clash and I had a solid theme. For my research, I used Presentation Zen. The main point that I noticed was "One Slide. One Point." I used this in the recreation of my slide because my first slide was very crowded. In conclusion, I think that the recreation of my one slide project is much better because of the research and the critique that I received from my classmates.