A damned defeat was made. Am I a coward?

Who calls me “villain”? Breaks my pate across?

Plucks off my beard and blows it in my face?

Tweaks me by the nose? Gives me the lie i' th' throat

Why, what an ass am I! This is most brave,

That I, the son of a dear father murdered,

Prompted to my revenge by heaven and hell,

Must, like a whore, unpack my heart with words

About, my brain.—Hum, I have heard

That guilty creatures sitting at a play

Have, by the very cunning of the scene,

Been struck so to the soul that presently

They have proclaimed their malefactions.

In Act 2 Scene 2, Hamlet delivers an intriguing monologue that leaves you with more questions than answers. While asking questions about himself, he uncovers meaning behind his father’s death. "Am I a coward? Who calls me “villain”? Breaks my pate across? Plucks off my beard and blows it in my face?" Hamlet says as he enters a room alone. Throughout the play, he questions his instincts, and goes deep down to the core about what he's truly experiencing, and what is just inside his head. In this specific scene, we see the angry and confused man who wants to find peace within himself, and find the truth about his fathers death. "Must, like a whore, unpack my heart with words, Why, what an ass am I!" This quote being my favorite, because Hamlet's realizing how crazy he really seems, and he's questioning his own thoughts. He is so upset with himself because his father was just killed, his mother married his uncle, he is in love with Ophelia, and yet all he can do is say words. That is by far my favorite line because I can relate to it. Sometimes when you are thinking so much all that comes out is words. It's good when we can express our feelings, but we want to do instead of say. I can relate to Hamlet completely. It makes you think not only about Hamlet and what he will entail, but also about yourself, and the questions you have been trying to decipher. Hamlet has been going through a difficult time, but he code switches depending on whom he interacts with. I like this scene from the play, because he's not putting on an act for anyone. In front of Ophelia, Polonius, and especially his uncle, he's not himself. He acts crazy and dramatic, but it's still not what he's truly feeling. When he went into the room and said, "I am now alone." you can tell he is relieved, that he can express his true feelings without anyone knowing.

"That I, the son of a dear father murdered, prompted to my revenge by heaven and hell." he is saying here that his father had just been murdered, and he is ready to get his revenge. Then he goes on to say he needs to get himself together, because all he is doing right now is standing around talking about it. After talking, thinking, and planning, he said "That guilty creatures sitting at a play have, by the very cunning of the scene, been struck so to the soul that presently they have proclaimed their malefactions." This concludes the scene, and puts a halt to Hamlet's crazy thoughts for now. He remembers that people who face their deeds, admit what they have done, due to guilt. Hamlet may be crazy, or he may just want justice for his father. Putting on a play of a king being murdered and watching his uncle’s reaction is genus. I believe that Hamlet really isn't crazy, but just lost in his own thoughts. His emotions are out of control, but when he has time to be true to himself, and think for himself, is when you can tell he's just a man who wants answers and justice for his father. 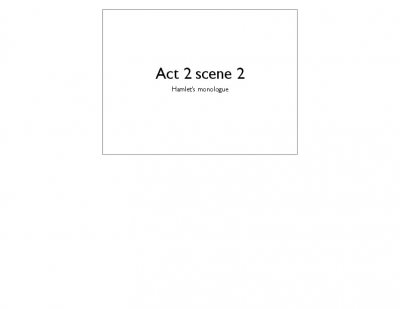