Hamlet, this play is base around the life of a Danish noble and the struggles he encounters in his life, but most importantly it’s about revenge of someone he loves most dearly. I will be analyzing a monologue he has in the middle of the play in the palace he is staying in.

Shakespeare has created the ability to connect the characters and their problems and/or situations with common problems and people. This quote from the play Hamlet, “To be, or not to be? That is the question—Whether ’tis nobler in the mind to suffer The slings and arrows of outrageous fortune, Or to take arms against a sea of troubles, And, by opposing, end them?” The idea of whether is it better to live or to die. The topic of suicide was frowned and shamed upon this point in time but it was a popular theme in English literature since the idea was very prevalent in the minds of the common public at the time. But I have come to the conclusion that Shakespeare himself didn’t mind the thought or the act of suicide. He talks more about how society brings misfortune more than it does fortune and that it would be okay to end it since it was indeed very frustrating and unfair. This point can be furthered in the second part of the lines.

“To die, to sleep—No more—and by a sleep to say we end the heartache and the thousand natural shocks that flesh is heir to—’tis a consummation devoutly to be wished! To die, to sleep.” My assumption about how Shakespeare views death through this play is sleep. He views death as a constant sleep in which you can never awaken from. I believe that the concept of death as a long slumber became popular through the Hamlet play. Shakespeare was very popular at the time this play was shown and passed down through out the years. He also continues the concept of suicide and how it could be an alternative to dealing with all the hardships life has to offer.

“To sleep, perchance to dream—ay, there’s the rub, for in that sleep of death what dreams may come when we have shuffled off this mortal coil, must give us pause. There’s the respect that makes calamity of so long life.” This portion of the famous Hamlet monologue is just about the concept of committing suicide or the thought of that action. But what is most fascinating about it the quote is the concept of dreaming if you’re dead. The logic of death according Shakespeare through this play is that death is just a long sleep. With sleep comes dreaming, you might know what you’re going to dream since you witness sounds, images and colors, but you can’t know what you will dream when none of those exist. This really puts a second thought in mind about suicide and is a very philosophical way of looking at the situation, what happens after death? 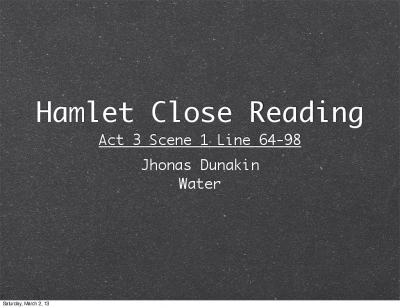