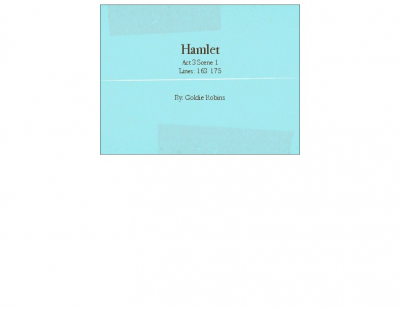 OPHELIA Oh, what a noble mind is here o'erthrown!— The courtier’s, soldier’s, scholar’s, eye, tongue, sword, Th' expectancy and rose of the fair state, The glass of fashion and the mould of form, Th' observed of all observers, quite, quite down! And I, of ladies most deject and wretched, That sucked the honey of his music vows, Now see that noble and most sovereign reason Like sweet bells jangled, out of tune and harsh; That unmatched form and feature of blown youth Blasted with ecstasy. Oh, woe is me, T' have seen what I have seen, see what I see! Ophelia was very powerful with her use of words in the monologue above. I have come to understand that overall, she was trying to say that Hamlet was always noble, but after what he said and did, she thinks he is lost in his own self. How he used to be scholarly, strong like a soldier, and to be one with much grace. How Hamlet him self was the rose of the state which he lived in. Meaning that he was someone that was looked at, like an elegant flower. Hamlet was always someone to look up to, and really admire as a person. What everything Ophelia thought he was as a person, she does not see anymore. One thing she says which is quite passionate is, “Th' observed of all observers, quite, quite down! And I, of ladies most deject and wretched,” I understood this to mean that out of all the women that were fond of Hamlet and fell for him the way she did, no one has ever been as miserable or upset as she is. I also seem to think that Ophelia always thought that Hamlet was so sweet and charming yet now he has been nothing but harsh and inconsiderate. She feels that how Hamlet use to act before is totally different from now, which is all affected by his insanity. Now that she see’s him as so insane, it makes her feel sorrow to see that he has changed and so different then before. Throughout reading Ophelia’s monologue over and over, I kept on thinking back to one certain movie and experience I have been apart of. In the movie John Tucker Must Die, there are these, three girls in different friend groups who go out with the same boy at the same time. The new girl in school notices this is happening and ends up telling them. Once all the girls find out, they’re heartbroken but want revenge. They use the new girl to get him by pretending to like him and go out with him, yet she actually falls for him, and falls for him hard. More then the other girls. Which is exactly what Ophelia did. She fell for Hamlet and when something bad happened, just like it did in the movie, they feel the worst pain. Worse then the other people and makes them feel confused. Just like Ophelia thought Hamlet was different this new girl thought this as well. She thought she saw another side of John Tucker, just like Ophelia thought she saw another side of Hamlet. Yet, over all both of their hearts end up being broken. This is a very modern day, teenage movie connection but it is also something that can happen to real life teenagers as well. Some fall in love with a boy and really fall for them. They think they know everything about this person and really see the good in them. See what other people don’t. They realize why some people fell for the person before because of how imaginable they really are. Until this one big thing happens, and everything falls apart. Their in shock, because they never even expected it at all, especially to the one they love, desire and look to for everything. They never saw this side of the person. How harsh they were and it felt very inconsiderate. The pain just goes right through them, as if the person they loved never really loved them back. This happens to teenagers just like it happened to Ophelia. Confused to what just happened. Like everything happened so fast, but still in shock from the person they thought they knew to the person they just saw.