The classic play, The Taming of the Shrew, written by Shakespeare is arguably the original romantic comedy. The Princess Bride, and 1980’s film, is a more modern romantic comedy, even though it takes place in a world resembling medieval Europe. The characters from the play that will mentioned most are Bianca, Lucentio, and Petruchio. From the Princess Bride, the characters of Buttercup, Westley and Prince Humperdinck will be analyzed.

There’s numerous similarities and differences between the characters but most similarities can be drawn from the interactions the characters have with each other. The two texts reflect that regardless of relationship status, men and women of a certain ilk will interact in set ways, portrayed in the roles they play such as dominant, subservient, or respectful.

“ Hic ibat as I have told you before Simois, I am Lucentio hic est son of Vincentio of Pisa Sigeia tellus, disguised to get your love.”

In this scene, Lucentio is letting Bianca in on his plan to wed her and win her love. He’s being sneaky outwardly as he is masking is true intent from prying ears by speaking his intentions in between lines of Latin.

Westley conveys his love using a similar train of thought. 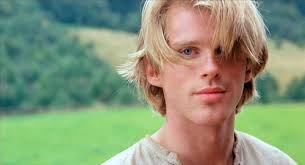 “As You Wish” -Westley

In the beginning of the film, Westley was a  farm boy at Buttercup’s farm. Whenever she requested something of him he responded by saying, “As you wish.” Buttercup later realizes this is his way of saying, “I love you.”

Westley is discreet, much how Lucentio was, in professing his love. Both men confessed their love in ways that would only be understood by the intended, Buttercup and Bianca. These men are of a strong willed and honest nature and, therefore, are willing to do moral things to get their woman. These moral things can also be construed as romantic, another trait both of these men share.

A difference in the courtship methods of Lucentio and Westley  are the levels of discrepancy. Lucentio’s methods are much more humorous, as they are poorly veiled and obvious to Bianca from the start. Westley, on the other hand, speaks in riddles and codes. It takes Buttercup much longer to decipher the meaning behind, “As you wish.”

“This is the way to kill a wife with kindness”

In this quote, Petruchio, the master of deceit and cunning, is making a speech to himself concerning the taming of his wife. He means to do horrible things to her, all in the name of love and kindness.

In the Princess Bride, there is a character whose evil tendencies do match Petruchio’s. 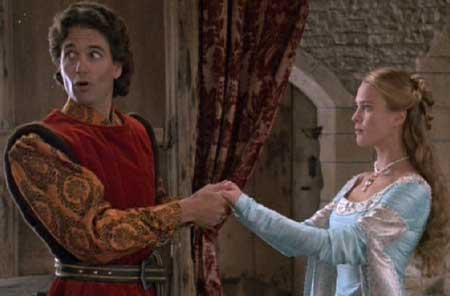 “Please consider me as an alternative to suicide.”

Prince Humperdinck is Buttercup’s betrothed. He chose to marry her and she went along with it because she believed her true love, Westley, to be dead. In this point in the movie, she knows Westley is alive and tells Prince Humperdinck that she will not marry him and if she is forced too, she will be dead by morning. Prince Humperdinck agrees to send word out to Westley (who is being held captive in the dungeons) that Buttercup wishes to marry him and not the Prince. Of course, the Prince is bluffing and never sends out word, leaving Buttercup to believe her true love abandoned her and that she must marry Humperdinck.

Both men are manipulative. They’re of a cruel and conniving nature. This makes them likely to take advantage of weaker people, as they both did. Although Buttercup, being likened to Bianca, is the one being taken advantage of by Humperdinck, Katherine is the one being abused by Petruchio.

In The Taming of the Shrew, near the end of the play, Katherine makes a speech about the role of women. After her sudden change of heart, her husband Petruchio tells her to come and kiss him. The play then ends shortly after.

Here is the most obvious difference in the two. The movie ends with Buttercup running away with her true love Westley while the play ends with Katherine becoming “tamed.” Both are considered happy endings, for their time period. Although the ends are vastly different, the connections between characters through their actions are still present. Petruchio and Humperdinck both expect their women to be subservient. The relationship Petruchio and Kate has is that of subservient/ dominant. This is the type of relationship Humperdinck wants from Buttercup.