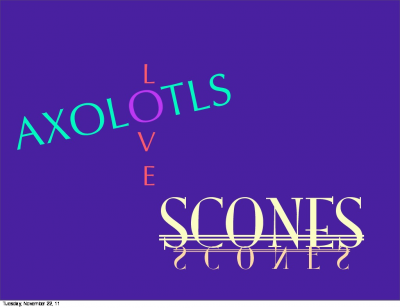 My slide is a direct play off of my English Me Magazine (the two articles with the most focus were about baking scones, and axolotls). I also kept the magazine's original color scheme, so it was a bit tricky trying to keep the contrast balanced so that the dark indigo wouldn't swallow the lighter teal.

The words AXOLOTLS and LOVE are written over the upper lefthand third of the keynote, so that and the stark colors should help eye movement. Since the cream color used for SCONES is the least exciting though it has the most contrast, I made it the biggest word. In a slightly darker color there is a small mirroring effect, also an attempt to let SCONES have a large impact. Generally, people look at the largest, brightest aspect first and I hoped to use this to my advantage.

Something like: Suddenly there is a big sign saying SCONES! What ever could it be referring to?


Also, the different font (which has serifs) also gives the word a more elegant feel which I feel embodies an actual scone; in the same way, the letter font for AXOLOTLS and LOVE are without serifs and are a bit more playful.

I decided not to use an actual picture as I am unfamiliar with using multimedia in that manner, and it would detract from the overall slide as a result. Using several different colors was my way of creating more interest.