Why did I chose how to place this slide.
My name is Amanda Thieu, this slide is to respresent me as a person, following regulations from the website presentation zen. For tech class 2012 we are being introduced to making visual slides than text slides. For example, we are learning to how use slide to capture the main image and make it stand out the most, trying not to let the text over power the image.


I placed my picture of the griaffe in three sections because it was too long to fit on one slide fully. I used the dark to light background, because it gave contrast to my picture and also the text as well. I am using the method bleeding a picture to create three separate sections because it looks neater. Since, humans are more comfortable seeing things from left to right, I placed the Giraffe's head first, it's neck next, and the rest of it's body last. I put the text at the bottom because I wanted the picture to be the main view of the entire slide. You can tell what the image is at first glance, and if you leave the image in just one main picture it would be terriably small. Making the image be the main point in the slide is very imporant. There are several reasons why I chosse the quote. Why? It respresents how some people are meant to be tall and others be short, it does not matter how you turn out. 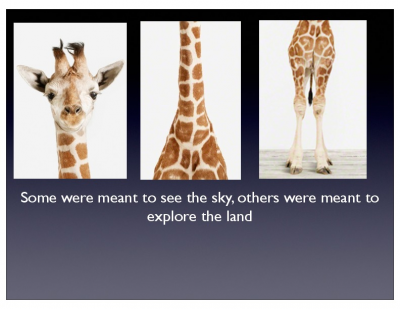