In the book “Starter for Ten”, by David Nicholls, you read about a student in  college that has still to find him self. The students name Brian Jackson. He grew up in a small town in England with his mother. On his day of departure you see how close she wanted to be to him and he being a typical teenager wanted nothing to do with her. You meet his three best friends. The different part about them and Brian is that, he is going to University and they are not. The town they grew up in is not very rich and not many go to college (or University, as they call it through out the book).

Once he got to University he felt slightly out of place seeing as the rest of the students came from high end families with much more experience and he was the top of his class but with lower standards. His room mates were aggressive athletes, the opposite of Brian. He distanced himself from them. Which isn’t entirely his fault seeing as he is different the rest of them, considering his background. Not saying he shouldn’t or didn’t try, but that was to come later.


When he did decided to walk around campus he ended up in the commons where he saw the flyer for University challenge. It was like it had his name written on it. He had been watching the show for years. He had gotten really good at answering the questions in a timely and correct fashion.  That’s where the story begins.

University Challenge is a real show in England. It is exactly what it is in the book, a variation on decathlon team on national television. The show has University students answering questions about different subjects in their own categories. It is show on BBC.

I think the story is a rather quick read. I wouldn’t call it a teen novel, but more of a realistic fiction about a young man trying to find himself in a world full of places to fill. Though it is not completely realistic sometimes that little bit of fantasy is what we need to make a book more relatable. When he thinks he found his place he doesn’t hesitate to fill the possession. He finds his place in University Challenge.

I would recommend this book to anyone who wants a easy but fun read. It has every component, it has romance, conflict, and drama. This book would get a 4 out of 5 star rating from me. It has some parts that could have been better written, but that is to be expected with any writing that isn’t world renown.

Author David Nicholls, born 30th of November, 1996 in Eastleigh, Hampshire is also the author of the novels The Understudy (2005)  and One Day (2009). He is also a Screenwriter and Theater play writer.  His screen plays included a nomination for a British Academy Television Craft Award, in the category Best New Writer (Fiction). He was most well known in England. Where at least Starter for Ten takes place there.

This is a great book by an amazing writer and I suggest to almost anyone and everyone read it. It is a quick, upbeat, funny book, with a good story that I think everyone could enjoy. 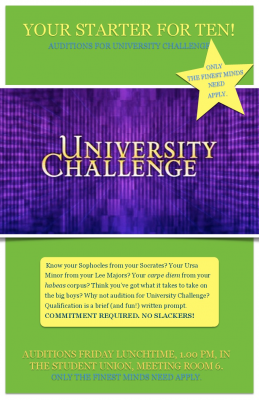