For my final part of my You and The World project, I decided to use social media to my advantage. I created an Instagram account that is about food. In my two previous posts were showcasing a plant-based diet. My first post was mainly me glorifying not eating meat because it is bad for you. Looking back at it, it was biased but my second post level the playing fields. For my second post, I decided to gather my own research to back up my original research. I interviewed 3 people, the first person decided to be vegan for health reasons, the second person my friend who has been a vegan her entire life, and her mother. By searching for my own research I learned that having a plant-based diet isn’t as good as I thought it might be, but that just wasn’t enough for me to believe that not eating meat was beneficial to me.

I had two parts to my Agent of Change; the first part was to stop eating meat and the second was to document it. I created this change for myself where I would stop eating meat for six weeks but I broke it up in parts. Every two weeks I would increase the intensity of my diet by making it more strict. The first week 1&2 I was a pescatarian, week 3&4 vegetarian, and 5&6 vegan. The hardest part was being vegan because I felt like I couldn’t eat anything and the easiest was being a pescatarian. I after completing the 6 weeks I didn’t feel much of a difference other than the fact of knowing the I’m not eating an animal. Then I created an Instagram to show people how easy it is. I decided to create the account because during the six weeks I followed multiple food accounts on Instagram and YouTube, so I decided to make my own. 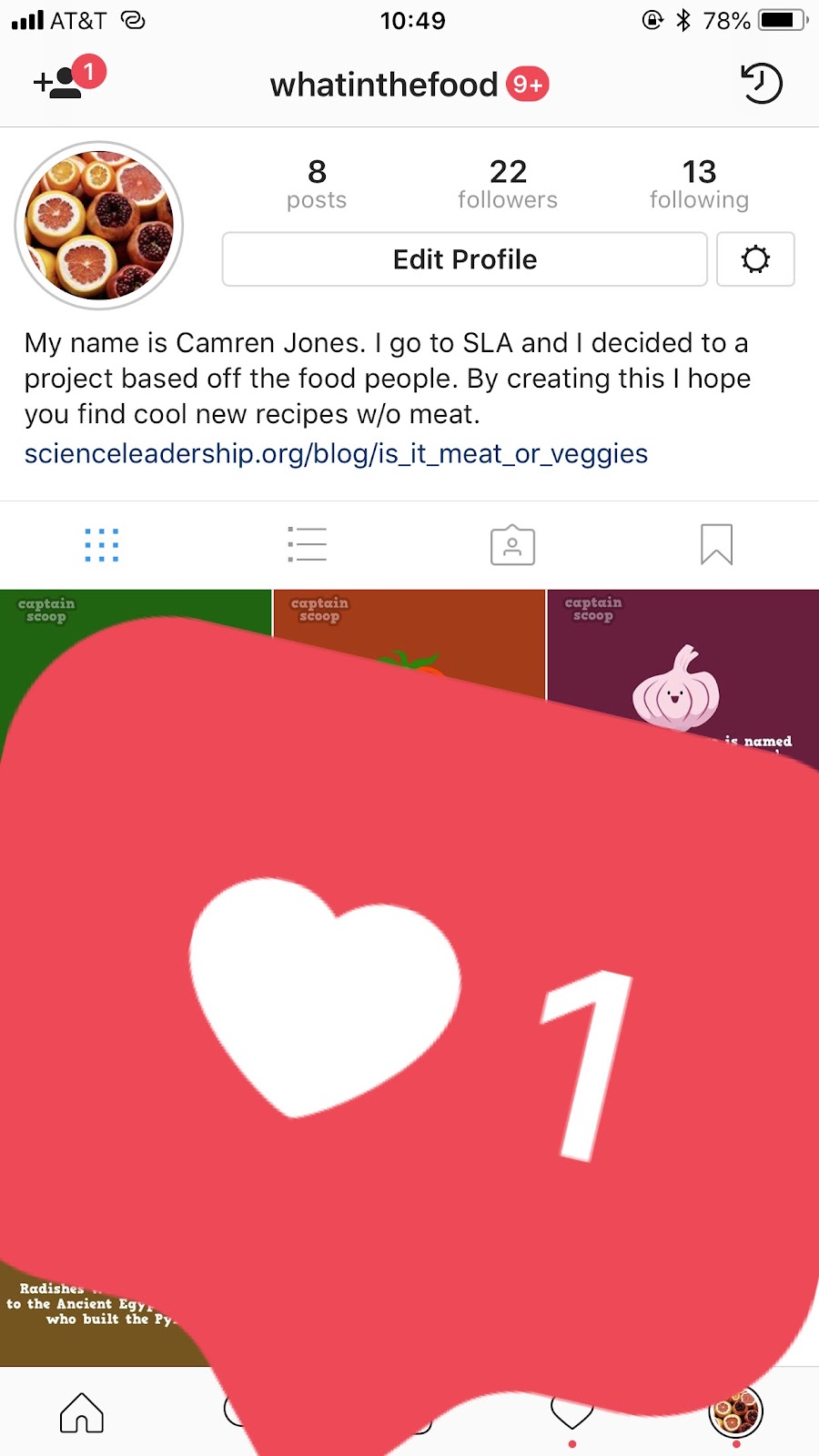 My experience of not eating meat wasn’t necessarily hard if I did it correctly. When I wasn’t eating meat I had to find other things to eat. The main thing I found myself a lot of starch. I ended up gaining 10 pounds at the end of the 6 weeks because I wasn’t watching what I was eating. When you don’t eat meat it is easier to gain weight unless you plan out what you’re eating. Several weeks later I still no longer eat meat, not for health reasons but because my body has adapted to being a pescatarian. I still struggle with my diet but I’m getting better by planning out my meals.

After completing this project I feel more aware of what goes into my body. By doing this my entire perspective on people who don’t eat meat. When I used to eat meat I thought people didn’t eat meat were crazy and not eating meat was the dumbest choice in the world. I felt as though I wouldn’t be able to survive with having a burger in my life but when I tried it for myself it blew my mind. I wanted to break the stigma of eating meat is the only way I could survive, and that is how my Finsta( food Instagram) was created.

The process of doing my Agent of Change was a little bumpy. My original plan was to document everything I ate but then I lost all my content because someone stole my phone. So then I was back to square one, but I still pushed through. I later came up with the idea of creating an Instagram and finding recipes to recreate. My project didn't turn out exactly how I planned but I managed.