The reason I created this slide to look the way it does is because I wanted to use keywords from my magazine and include them in the advertisement.

These words included passion, art, and me.

The major piece in out Me Magazine was our passion piece. For my passion piece, I wrote about my love for art. Therefore, it was only natural to include that in the slide.

I also did not want the slide to appear crowded, so I used as little words that I could. As for the picture, I looked at pictures that had not been copyrighted and were open to the use of the public. I saw the picture and I really liked it. I also felt that I could relate to the picture. Art had ¨pulled me by the hand" when I was younger and has continued to do so these past years. It also appeared the be bleeding off of the page and brought my attention to it.

I spaced the letters and put them in a unique font that I found eye-catching. As for the spacing, I used graph paper first the see how it looked and when I created a set-up that I found appealing, I translated it onto the slide. 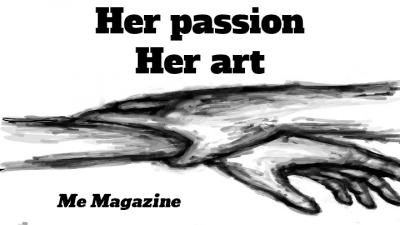