Posted by Alex Colón-Vazquez in Being Human - Giknis - C on Monday, October 26, 2015 at 11:46 pm
​The Metamorphosis is an allegorical story, which gives a background on the events that symbolize a more general condition of modern society. The press release illustrates multiple symbols that show what the "Alex and Cam Radio Show" is about. Each symbol gives viewers an easy guess as to what the radio show talks about and what goes on, which then connects with the audience response. The audience response is based off of a New York Times article, during the process of writing the audience response I came across many obstacles to make the article more real and official. The audience response includes interviews with Barack Obama, Bill Gates and many other guests. I decided to include interviews with guests because I wanted to make the article more realistic and interesting to grabbed the readers attention. Near the end of the audience response I included a "for further reading" bit that would introduce the cultural response and tie it in with the rest of the response. The cultural response connects television programs with the topics that the "Alex and Cam Radio Show" talks about, my partner Cameron used popular television shows because the audience would be able to recognize and understand how they connect to the themes of the "Alex and Cam Radio Show". 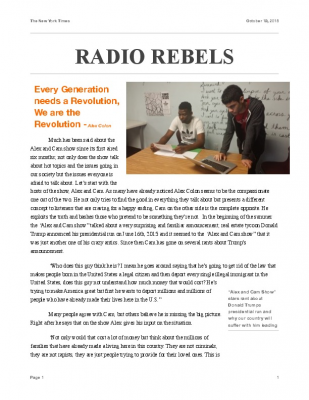