In my first post, I explored the horrific actions of orca captivity. As I studied and dug deeper into the treatment of orcas. I found current events about the situation and discovered facts that had shocked me, including brutal images that will haunt me for many days.

Recently, at SeaWorld Orlando, a female orca, named Malia, is living her final days as a captive orca. In the article, SeaWorld of Hurt: Campaign Updates, they had stated that the ten year-old orca has been facing excruciating and painful infections for years, up to the point where the pain had finally broken her down. The painful infections had caused an infection in her upper jaw area. The jaw is now discolored and many of her teeth are either damaged or broken. More than half of SeaWorld orcas have died due to the lack of care, resulting in the infections. Malia’s father, Tilikum and her sister, Unna, have died in 2015 and 2017 due to painful infections. 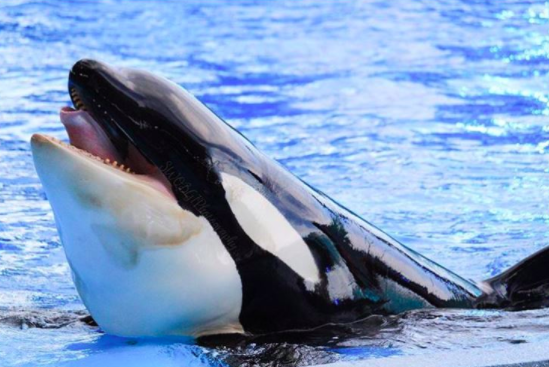 I found a very interesting  article, written by John Jett PhD and Jeffrey Ventre MD, both former SeaWorld trainers. These doctors were also cast members of the documentary, Blackfish. Both Jett and Ventre are orca captivity activists and do amazing things to aid orcas. John Jett has participated in “The Orca Project”, which is a “small but effective non-profit corporation, collaborating with some of the world’s top marine mammal experts and caring professionals from diverse backgrounds,”, stated on their website. There was a section in the article where they discussed the interaction between Corky and Kandu, two female orcas living at SeaWorld. An artificial death that wouldn't happen in the wild. The two already had tension between them for a long time, but one day, right as the show was going to start, Kandu rammed into Corky. Because of the force of the impact, it severed her jaw and severed an artery. Kandu, who was eleven years old at that time, slowly bled out for 45 minutes, in front of the crowds at SeaWorld San Diego, and eventually passed away from the loss of blood.

Image of Kandu bleeding into her death. Here is a video of it happening.  Image Credits 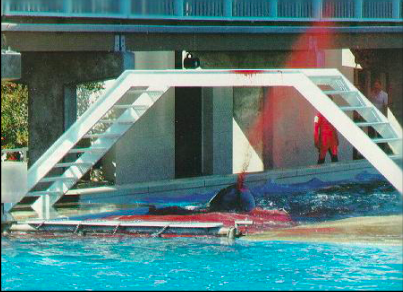 For my original research, it was a difficult and long journey. In the beginning, I had big envisions to have multiple interviews with marine biologists who specialize in orcas, but it ended up not working out. I contacted PETA and had gotten some answers back by an animal’s rights activist, Melissa White. Her answers were not what I had hoped for, so I had sent many more emails to anyone I could find. I even emailed all of the SeaWorld trainers that had a voice in Blackfish. I would have never thought that any of them would reply.

A couple of days after I had emailed the trainers, I received one email back from Jeffrey Ventre. It was a genuine exciting moment because I was so pumped that I had gotten to interview with a former SeaWorld trainer and a Blackfish cast member! Not to mention, he is a Physician and a medical doctor too. Shortly after, I emailed him my 10 questions I had, and within 30 minutes, he replied back with his answers. 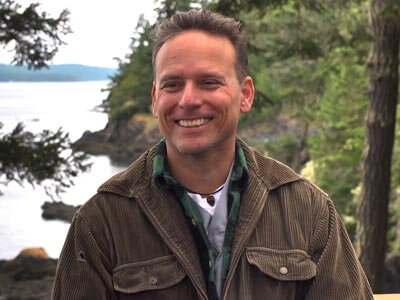 Here is a doc with the questions I asked and Dr. Ventre’s answers.

I asked him a variety of questions, ranging from his research to his personal experiences with orca captivity. I wondered what an experienced scientist, who specializes in the topic, would think what would happen to orcas in the long run. Dr. Ventre replied, “The only orca population that is endangered is the Southern Resident orcas, the ones SeaWorld decimated. They now don't have enough fish due to dams on the Snake and Columbia Rivers. If the four lower Snake River Dams are not breached, I believe this particular group will go extinct in your lifetime.” SeaWorld have captured at least 80 orcas from the Southern Resident waters. When the orcas were becoming scarce, SeaWorld ventured to different oceans, up north, the perimeters of West Canada. 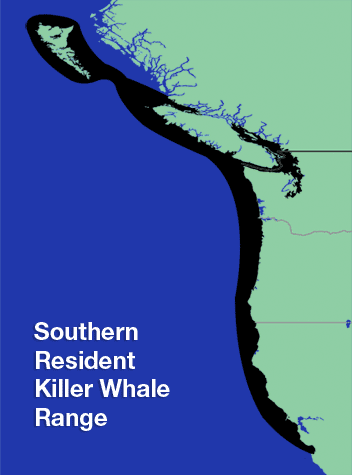 Image of the Killer Whale range from California and up. (capture range)

Going back to something I had pointed out, SeaWorld employees were supplying uneducated people with false information. I thought it would be interesting to ask Dr. Ventre, a previous SeaWorld employee on his experience. He replied that  as a trainer, received PR lessons from SeaWorld company about orcas that could be said to the guests. The information was very misleading said Dr. Ventre. To give solace to my excitement, I asked Dr. Ventre about the filming experience of Blackfish. He answered saying that it was a super fun experience because he gotten to reunite with his former trainer friends, and film at a beautiful location. Dr. Ventre, I, and many other people who are against orca captivity agreed that, in order to support the cause, people should not continue purchasing tickets; henceforth, helping the business decline. Also to spread awareness, even if it is simply educating another person the facts behind orca captivity.

I have thought about what I, as a young teenager could do for such a massive cause. For my agent of change, I have many ideas in mind. I could do something creative. For example, making an illustrative book, posters, or create a film. I could also start a fundraiser and with the money, I would be able to donate to an organization helping orcas. I also thought about trying to march in a protest, but since I live in the Northeast, there isn’t  protests on orca captivity. Stay tuned because whatever my agent of change is going to be, I will make sure it does become an agent of change.

I love your post! It was really informative and I liked how you included your two interviews and your story on how you had a rocky start finding someone to interview. I think that your post was very well thought out and that you clearly picked a topic you are passionate about. It was really sad reading about the horrible things that happen to whales in SeaWorld especially what happened to Kandu. Why were they injecting Malia? For your Agent of Change, I think it would be a great idea to do something to inform others because from what I learned while reading your interviews, a lot of people are misled really often. A film or an illustration book would be perfect!

This post is so good! I really like all the information you provided and it made me start to realize this stuff happens a lot and no one does anything about it. I am glad you did this as your topic and I think your agent of change will be really great!

Great post on your original research of orcas in captivity. The interview with Dr. Ventre was compelling and provided a lot of information about the issue. For your agent of change, maybe you could be a SeaWorld trainer.

This is sad ( like your post though )because first I don't like abuse, the second I hate that sea world that apparently rescues and releases them don't do it to some of the fish and not to mention hurts the animals. and the use them for a hurt full and silly act, it is like the Ringling Brothers but underwater, because they would get elephants, use them for the silly act dress them up and hurt them, then they die way earlier than there lifespan, it is messed up, I just can't believe what the world has come too, and why destroy Ringling brothers business, but not sea world, when they are alike that is just crazy.

Amazing Post! Great job on your original research. The part when Kandu started bleeding made me really sad.

Love your post ! It is nice to see someone who really cares about animals hope you come up with a good agent of change !

Awesome post! Maybe you can conduct research on safe facilities for Orcas, or what some places/people are already doing.