In the previous blog post, I talked about two things: deep poverty in Philadelphia and hunger as a result of it. In this blog, I’ll be talking about the same thing, except it’ll be told by a woman who has been through the worst possible situations. But before I tell her story, I have to inform the new viewers about what deep poverty is. 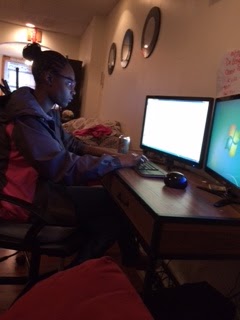 This is a picture my mom took of me while writing down notes I took when I was conducting my interview. I was writing down what the lady was saying and made notes to myself.

This is a picture of me talking to the lady. I was asking her a question about her experience with hunger.

For the original research plan, I conducted a formal interview about a 26 year old African American’s experience. I was originally going to do a field observation, but I couldn’t arrange a time for one. The questions that were asked to the person I interviewed were basic, straightforward questions. I’m going to include some question and answers that I think are important to hear. I started off the interview by saying my name and what the interview was about; Kyla Gladney-Enos and deep poverty. I then told the time and the date; 7:19 PM on May 5, 2017.

The first question was, “How long have you lived in deep poverty and what was your experience like?" She answered, “Umm, I’ve been living in deep poverty since I was about 16. It’s kind of hard, but if you know how to make it work, then it’s not as hard as you think it is.” I didn’t know a lot of people have budget plans, but they do. I’m starting to think more and more people are coming up with plans. The second question was, “Did you ever experience hunger? If so, how did you manage paying your bills and feeding yourself? If not, what did you do to help yourself not be hungry?” She answered, “Umm, yeah, I experienced hunger a couple times. Uh, I would just like work. If I was working, I would always try to pay half of the bills, and try to buy food with the other money.” 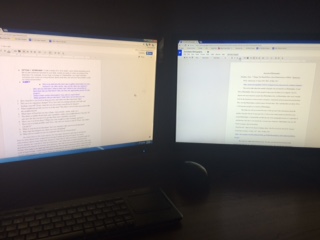 This is a picture of my work after I was finished taking notes. The left monitor has the interview questions, while the right monitor has my notes.

Writing the questions were not that hard. I didn’t spend a lot of time stressing over my questions. While I was asking the questions, I should have asked more questions about her answers because that would have given me a deeper look into her life. My questions were answered the way I wanted them to be answered. She answered them in complete sentences and gave a brief synopsis of her experience. I already knew a lot about this topic, so I didn’t really learn anything shocking, but some of the things she said surprised me. I personally think kids who grow up in poverty have a hard time getting out of it because that’s what they know. I’m still wondering how people who are living in deep poverty don’t wind up being homeless because as time goes on, prices of simple things start to increase. For my Agent of Change part of this project I think I’ll make a care package for the lady I interviewed. I’ll have nice quotes and museum information that she could use.

I really like how you put the recorded interview and your annotated bibliography into this blog. It was very well written and I also liked how you put pictures of you working. Good job!

This is really good Kyla! You are such a great person. I like how you interviewed a person that lives in poverty. I can't wait to see what the results of your Agent of Change. Keep up the great work!