Source: https://feedbackglobal.org/food-waste-scandal/. This is a visual representation of all the food that is wasted per year. 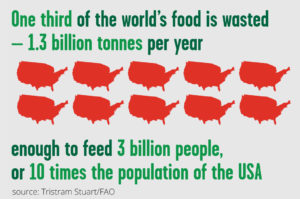 What would you do if I told you that we have all the means to end hunger worldwide? Every year, approximately one third of all food produced is wasted, which is enough to feed 3 billion people. America contributes a huge number of that waste, as up to 50% of all food in the U.S. is thrown out annually, which is equal to a staggering 160 billion dollars. Every American typically wastes 12-25% of food they buy, which can cost up to $1,500 in expenses per year. Despite all the food being thrown out, an estimated 800 million people live in a state of malnourishment, along with 50 million Americans living in insecure food households, which means they struggle to afford food.

A main culprit of why food waste is so great in America is because of sell by dates. The only foods that are legally required to have a sell by date are baby food, and even the meat and egg products is voluntarily written by the producers. Many people believe in these numbers even though the main reason food companies put expiration dates on their products is so people buy more of their products in a shorter amount of time. Expiration dates are supposed to tell the buyer when the food is at its peak quality, but most people take this to mean that after these dates the food must be discarded, even though most food can last weeks, if not months past the expiration dates. Because of sell by dates, around 90% of food we throw out is not actually expired.

Source: http://www.savethefood.com/. This chart shows the amount of food that is tossed annually by the USA, Canada, Australia and New Zealand

One of the reasons this problem is so important to me is because no one really talks about it.  One of the reasons this problem is so important to me is because it is not a widely known topic. People talk about world hunger and how it’s something that needs to be solved, but everyone makes it seem as though the issue is the lack of food and not the distribution of it. Most food waste is created by food that was disposed, not because they were inedible, but because they were not not aesthetically appealing to buyers. Farmers who are growing food purposefully throw out thousands of pounds of fruits and vegetable just because they know it won’t sell. The rational solution would be to donate the “misshapen” fruits and veggies, but because farms don't receive tax cuts when they ship the food out to shelters, it ends up costing themselves more money. Because of this, many farmers choose to throw out their less desirable foods where they go to landfills. Farmers also use 4.5 billion hectares of land to grow food, and because of food waste 1.4 billion hectares of land and 250 trillion litres of water is wasted.

Once the food arrives at the landfill, most people believe that the food will decompose into the ground and turn into compost. However, landfills are not separated by types of trash, which means that the discarded food is mixed with cardboard boxes and plastic bags. When the food is not given a chance to breathe and decompose naturally, the food waste creates a greenhouse gas called methane. Methane is a gas that is 20 times more able to trap heat than CO2 which is one of the main greenhouse gases that contributes to the weakening of our atmosphere. Food waste emits so much methane, that if it was a country it would be the third largest greenhouse gas producer, following China and America, generating 3.3 billion tonnes of CO2. To conclude, food waste is a problem that needs to be dealt with as soon as possible, because everything about it hurts the community and the environment. 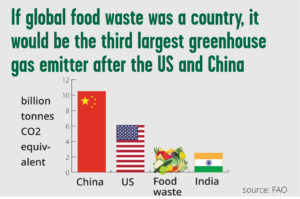 Source: https://feedbackglobal.org/food-waste-scandal/ . This graph shows the different amounts of CO2 between different countries with Food Waste becoming its own country


Here's the link to my annotated bibliography.

I really enjoyed your post. I learned a lot and it is crazy how much CO2 is produced by the food. Maybe you can go to a restaurant and see how much food they might throw out or not eat.

I liked your hidden cost of food waste it was very informative about how much food that we actcullay waste. I liked the picture of if food waste was a country it would be the third largest greenhouse gas emetter. This was really good keep going with the awesome work.