The Proposal of The Shrew

I chose to focus on a romantic comedy, this movie stars Sandra Bullock as Margaret Tate, and Ryan Reynolds as Andrew Paxton. Margaret Tate is a canadian woman who finds out that she is facing deportation because of her expired visa. Since she is very committed to her job she convinces her assistant Andrew Paxton to pretend as her fiance until she can fix visa issues. The Taming of the Shrew shows the journey of how two polar opposites began a relationship and eventually through the up’s and down’s fell in love, this comedy revolves around Petruchio’s journey to marry the older sister but ill-tempered Katherine in order for the younger sister Bianca to marry. Both The Proposal and The Taming of the Shrew have similar issues that characters in The Proposal and The Taming of the Shrew, Margaret Tate and Andrew Paxton

The Proposal and The Taming of the Shrew both contains two strong female characters that are filled with hardship and are considered to be heartless, but both women fall romantically in love once both males in each story show them how to love.

Katherine: “ What is you crest? A coxcomb?

Pertruchio: “A combless cock, so Kate will be my hen.”

Katherine: “No cock of mine. You crow too like a craven.”

Pertruchio: “Nay, come, Kate, come. You must not look so sour.”

Katherine: “It is my fashion when I see a crab.”

In this conversation Petruchio and Katherine fight back and forth, in their heated exchange of words many sexual references were used as clever comebacks. This relates to my thesis statement because it gives an example of how negative Katherine can be as a result to how Petruchio tries to tame her.


Andrew and Margaret are put under pressure as they are demanded to tell the story of who they got engaged. But it takes a turn for the worse as Margaret and Andrew secretly insult each other as they tell the tale of their engagement.

In this scene of “The Proposal” Andrew and Margaret go to Sitka, Alaska where Andrew’s family lives so Margaret could meet them. Margaret wasn’t adjusting to well to Andrew’s hometown and was already on a rocky start with his family. Later in the scene Andrew and his dad have a heated discussion about his relationship with his boss, at that moment asked for the attention of everyone in the room and announced that he and Margaret will be getting married. When asked if they would have children in the near future Margaret and Andrew go back and forth insulting each other about what they lack and their weaknesses.

Katherine: “ Husband, let’s follow to see the end of this ado.”

Petruchio: “ First Kiss me, Kate, and we will.

Katherine: “ What, in the midst of the street?”

Petruchio: “ What, art thou ashamed of me?”

Katherine: “ No, sir God Forbid, but ashamed to kiss.”

Petruchio: “ Why then, let’s home again. Come, sirrah, let’s away.”

Katherine: “ Nay, I will give thee a kiss. Now pray thee, love, stay.”

Petruchio: “ Is not this well? Come, my sweet Kate. Better once than never, for never too late.”

In this scene of "The Taming of The Shrew" Katherine falls in love with Petruchio despite their recent fights in the early scenes. Before they do anything Petruchio wants Katherine to kiss him in the middle of the street, almost as if it proves her love to him. She doesn't know how she feels about kissing him in the street at first, but then kisses him as they are about to leave. The quotes relate to my thesis statement because it shows how their transition from hating each other to loving each other at the end.


Margaret holds back on expressing her true feelings for Andrew, Andrew demands that she commit to what she feels and that he is in love with her and wants to get married. She eventually gives in and kisses him. 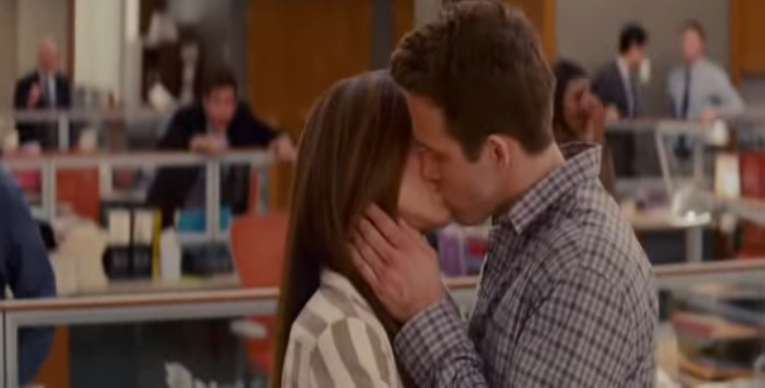 In this scene of “ The Proposal” Margaret packs up all her things from her office as she prepares to be deported back to Canada where she was born. Andrew follows her back to New York from Alaska to finally make her realize that she doesn’t need to be cold hearted and that she is wanted. As the scene continues Margaret continues to push Andrew away and makes excuses as to why she prefers to be alone, but Andrew stands his ground and eventually leans in to kiss her in front of all of her employees. This scene relates to my thesis statement because it shows how Andrew forces Margaret to face reality and realize that she doesn’t always have to be tough throughs others, he even stands his ground when she tries to push him away and point out all of his flaws and why they shouldn’t be together. This scene relates to the "The Taming of The Shrew" because in the beginning of the movie Andrew hated her because she was heartless and a cruel boss, but at the end they fall in love and declare their love just as Petruchio and Katherine did in the book.

Every man and woman is expected to always be in a relationship, and if that relationship were to end the hunt for a new partner becomes a notion that clouds what really matters. But when the untamed lose their instinct to hunt for a new partner, their hunger can become very bitter. “The Taming of the Shrew” and “The Proposal” show how two strong, cold hearted female characters fall for the men they would have never thought they would be with. Society uses this status quo to advertise that you have to act like a damsel in distress to be in a relationship. Both the movie and the book give a clear example of how the damsel in distress act isn’t always the solution.