In the game, each player is a survivor who ended up stranded in an island. Since there are a limited number of resources for everyone on the island, there is going to be a lot of acts of camaraderie and betrayal. Luckily this is all fated to happen by God himself. Whoever has the most humanity and/or food is destined to win by God’s will.

Humanity is a game about choices. Your choices decide on whether you win or lose the game. There are 2-4 players in Humanity. Each player can choose which mode of transportation represents them.

At the beginning of the game, you start off with five humanity points and five food points. When you land on a square with a symbol on it, you must draw a card that contains that symbol. If the card tells you to do something, you must follow what the card says.

Hazard: This card means something has happened in your travels. You might lose food or something worse.

Blessing: You are being blessed. God is watching you and your travels. This card will always have a positive impact on the player.

Sanity: Sanity can affect you in weird ways. Always keep track of them! You never know what's going to happen on one of these cards.

Roadblocks: Each player can setup 1 roadblock per game for the cost of 3 humanity point When another player passes an owned roadblock the owner of that roadblock can then take 3 food from that player for the price of 1 humanity point.

When starting the game, roll a dice to see who goes first. Once that is over, the person who rolled the highest number will start first and will start in a clockwise direction. Each player then picks an item that they want to represent them as they travel in the game.

You start the game with 10 humanity points and 10 cans of food. Make sure to keep track of your points as you play the game.

At the end of the game, you tally up all of your points. There are two ways for the game to end: reaching the end of the board and running out of food before reaching the end of the board. When a person loses all of his or her food points, he or she cannot play the game anymore due to starvation and has to put away all of his or her humanity points back into the pile. The game ends when everyone is no longer able to play the game. Once that happens, the humanity points and food points will be added up to get the player’s overall score. The player with the highest score wins the game.

Humanity: Humanity points are essentially the player’s consciousness. In the game, players will lose or gain their humanity based on their choices from the cards. When a player does not have any human points whatsoever, he or she will essentially lose his or her consciousness, but the player will still be alive if he or she still has food points. At the end of the game, each humanity point you have left is worth 1.5 points to your score.

We decided to base our game off of Snakes and Ladders because of its origins. Although it is unknown who created the game and when the game was created, it is widely believed that Saint Gyandev created the game (known as Moksha Patam) around the thirteenth century to teach children about morality and karma and kama (destiny and desire). Even though we did not add snakes and ladders to our board, we decided to incorporate roadblocks in order to encourage the player to make decisions similar to how the man and the boy have to make decisions essential to survival.

Although The Road is about a man and a boy following a road, there are bumps and obstacles along the way such as facing the weather conditions, encountering cannibals numerous times, and confronting a looter. As a result of that, we decided to make our board game curvy rather than linear. By making our board curvy, we emphasized the nonlinear path the man and the boy take in the book. Regardless of the circumstances, the man and the boy are able to progress. Because of this progression, we decided not to add snakes to our game since it would contradict this idea by having players regress.

For the pieces players can use in the game, we settled on different modes of transportation. As for the environment in the game’s lore, we decided on making it an island since it would emphasize the peculiarity people would experience in a mysterious world like The Road. To make the island have a feeling of danger to it, we decided to add roadblocks that would prohibit players from passing without making a decision. Although our game is about players who are stranded on an island, we did not choose to represent the different modes of transportation as tools players can use to traverse the map. Instead, we chose to have them represent the items the players would carry similar to how the boy would carry a toy truck with him.

We decided to have two different types of points for our point system: humanity and food. In the book, these two aspects help define the man and the boy. For instance, when it comes to humanity, every character displays their qualities and flaws. The man shows how selfless he can be towards the boy, but he also shows his colder side through the act of murdering people with the boy around. As for the boy, he shows compassion towards other people, but he also pressures the man to save others despite the man’s struggle to keep them both alive. By having humanity points, the player can gain or lose his or her humanity throughout the game.

Along with humanity points, we chose to incorporate food points into the game to reflect the protagonists’ need for consumption. Throughout the book, there are many moments where the narrator mentions food. Without food, the man and the boy would die from starvation. In a world that has a scarcity of food, the notion of starvation can be reflected by the main characters’ lean appearance. Because of the necessity of food in The Road, we decided to make a rule that emphasizes it through food points. If the player no longer has any food points left, he or she dies and cannot play the game anymore.

As for the cards, we based them off of the cards from Monopoly. In Monopoly, besides property cards, there are two types of cards players would receive when they step on that tile: community chest and chance cards. Since this game does not involve money, we decided to have four types of cards that would match the situations in The Road like hazard, blessing, scenario, and sanity cards. Although hazard and sanity cards seem to be similar from one another, we decided to separate them into different categories because of the slight differences between them. For example, hazard cards involve situations where the player is facing situations that could be fatal while sanity cards involve situations that would degrade the player’s mentality or actions a player would do because of his or her mentality. From situations like the boy witnessing a cooked human infant and the man receiving a shot from an arrow, we believe hazard and sanity cards would help reflect the nature of the book well.

In contrast to the hazard and sanity cards, there are blessing cards. Even though the world the man and the boy live in can be gray, we decided to add blessing cards because of the good moments in the book such as when the man and the boy encounter a bunker with plenty of supplies. In addition to that, we decided to call these types of cards “blessing cards” because of the man’s faith in God. When a player receives a blessing card, would only gain humanity points and/or food points rather than losing them. From that, the player is able to have more of a chance of winning the game. With blessing cards, we believe these cards can help give some relief to the players when they stumble upon these cards.

Even with sanity, blessing, hazard cards, there are events in the story that are not related to any of them. Because of that, we made scenario cards that would reflect other moments in the book that are not entirely hazardous, traumatic, and blissful. For instance, we included the time when the protagonists encounter Ely by adding a scenario card where it states that the player that he or she gave food to an old man. With the scenario cards, we think it can help show the ambiguity in The Road. However, even with ambiguity, we still want to include other motifs that might contradict it such as faith.

Since faith is reflected heavily in the book, we chose to contribute it to our game’s lore. In our board game, we want to mention God and how he determines who would be the winner and the choices the players make because of the man’s belief in fate. For example, the man believes that he has been chosen by God to protect the boy at all cost. With this mindset, the man is inclined to protect the boy even if he kills others in doing so. Although it can be argued that the man is destined to kill others to protect the boy, this skews the belief that the man is entirely a good person since the act of murder is usually seen as an awful act to commit. In our game, we want to emphasize ambiguity. By having the idea of a winner being determined by God, it creates a feeling of faith similar to the man’s faith in God; however, it comes at a cost of loss.

Because there are some cards that require the player to choose someone to take away humanity and food points from, there are times where players are bound to have conflicts with one another. Even though it might make the game a bit challenging to play with other people, we want to show how people in The Road stumble upon conflicts at times because of contrasting perspectives. For instance, there is a moment where the man and the boy argue over the outcome of the looter; the man believes killing the looter is right while the boy condemns the man’s act. Similarly, when a player chooses another player to take away points from, the person losing points will probably have a different perspective of the situation than the one taking his or her points away. In a world with scarcity like The Road, this creates competition between the players. 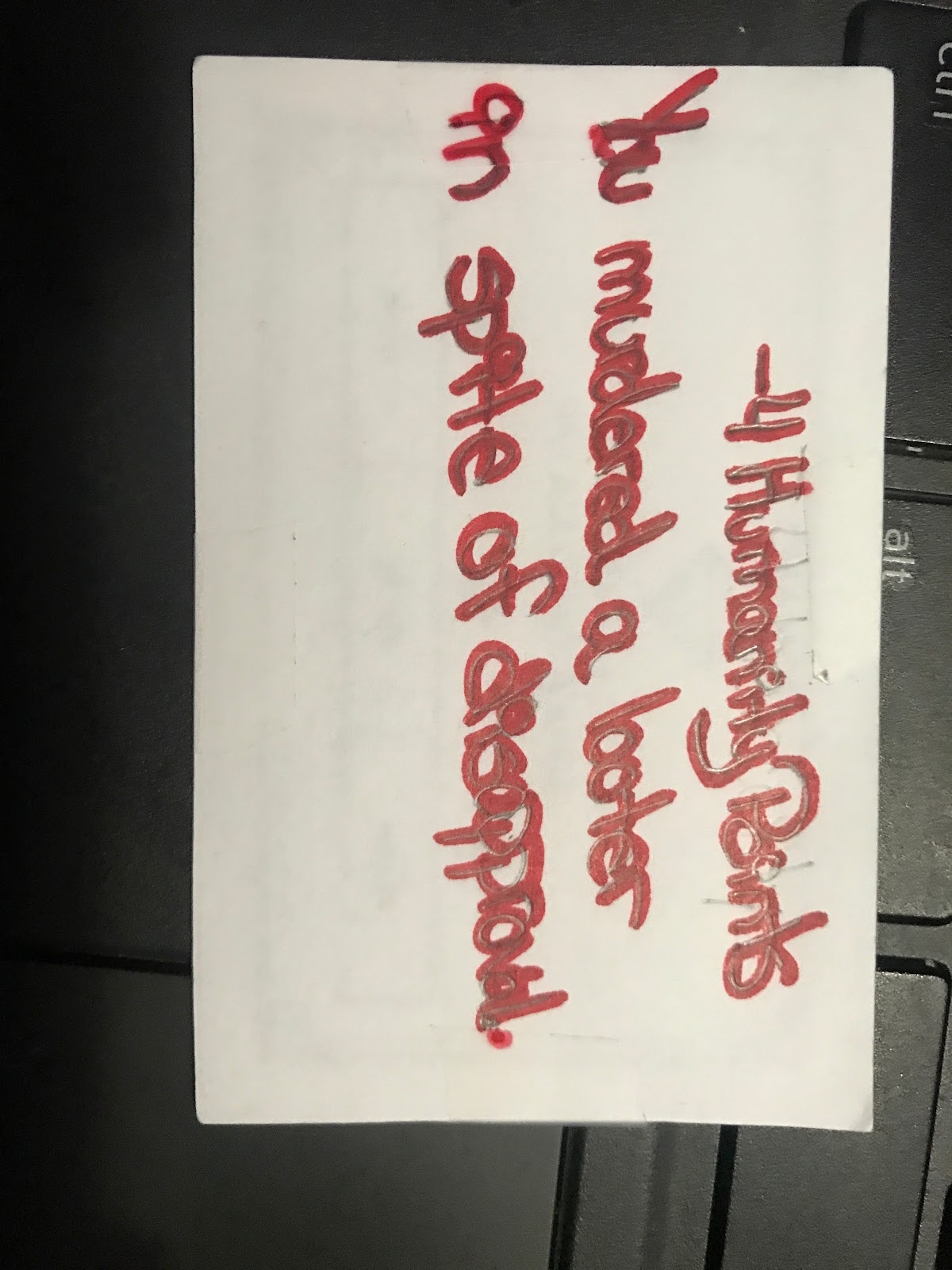 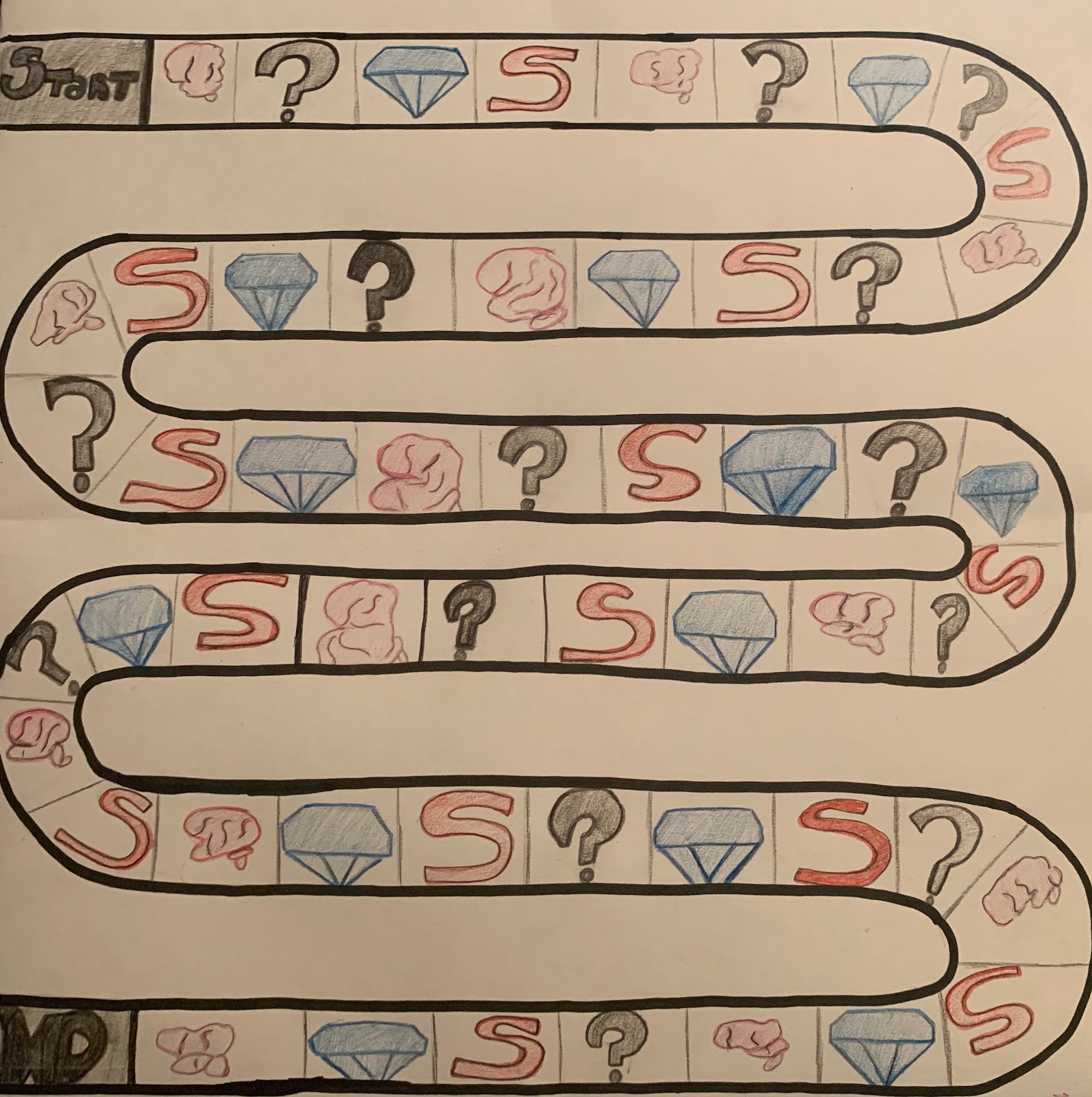