Romance is a thing that has been molded and reproduced for centuries. Books like the Taming of the Shrew portray romance as a victory and something to be sought after. Petruchio, the leading man, makes it his duty to have the intimidating Katherine as his wife. In the 2010 movie Submarine, shy and observant teenager Oliver wants to do the same thing; seeking the affections of conventionally unattractive girl in order to satisfy his need for romance.

Oliver and Petruchio are alike and different in both motive and character. Their initial idea of wanting to have a relationship are the same, but the way that going after the women they want are almost completely different. Petruchio is a brute and aggressive character who seeks to have Katherine as his wife for his own personal gain. This is very much Oliver’s initial reason for wanting to be with Jordana as well. While the motives are the same, the actions are different, these two situations make room for exploring society’s view on relationships, love, and how they are presented with the opposite sexes. More specifically, that true relationships are built on love, not by manipulation or force, and that women have more control in relationships than they had before.

“Few words suffice. And therefore, if thou know one rich enough to be Petruchio’s wife (as wealth is burde  of my wooing dance...She moves me not, or not removes at least affection’s edge in me, were she as rough as are the swelling Adriatic seas. I  come to wive it wealthily in Padua; If wealthily, then happily in Padua.”

During this scene, Petruchio  meets with Hortensio, who brings him with the option to marry Katherine. Petruchio, whom is introduced as a arrogant and violent (moments before he was hitting Gremio), learns that Katherine is wealthy. He then sees her as an opportunity to become even more wealthy despite not loving her. In this quote, he describes how regardless of how terrible she is, that he will pacify her even  into obedience when they marry. None of the other characters in the scene object to this, most likely because men being in charge of relationships was a common thing during the time period.

The main character in Submarine, Oliver Tate, finds himself with a similar mindset when he is introduced to his love interest. The deliverance is different, but the intent is very much the same. 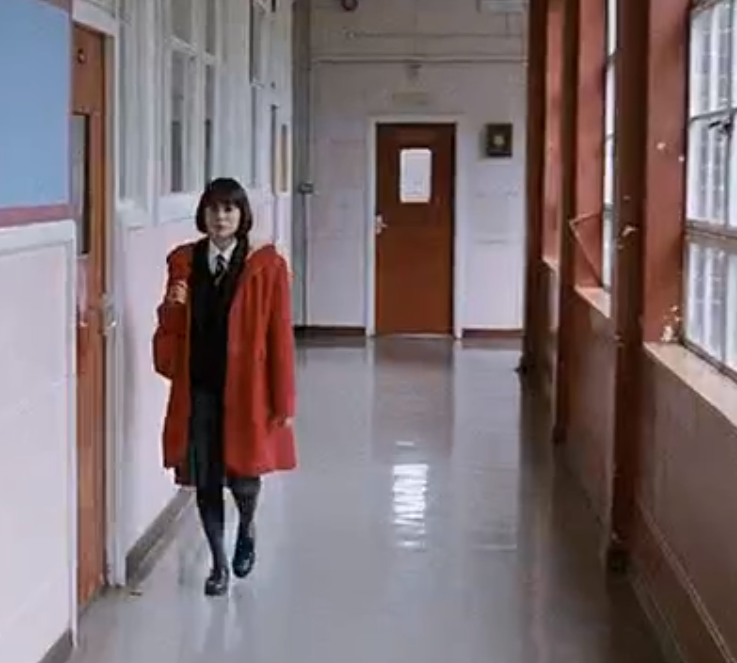 Moments before this scene, Oliver Tate is reminiscing about how he wishes to be popular and beloved when he dies. Along with this, he believes that having a girlfriend would add to his fantasy. When he first comes across Jordana Bevan, he already has his mind made.

“Her only real flaws are is her sporadic bouts of eczema Other than that, she has many qualities. She never speaks about herself. She could be anything. She's moderately unpopular, which makes a romance between us more likely. She's also a girl - to be seen with her would improve my street cred, which, though high, could be higher.”

Despite the movie and play being centuries apart,  Oliver and Petruchio manage to share a similar viewpoint on women and relationships. Both of them want to be in a relationship not based on love, but on social status. If Oliver dates Jorana, his popularity amongst his peers and family will increase to the point that when he dies, he will have a legacy. Petruchio wants to marry Katherine so that he will become even richer than he already is. However, Oliver chooses Jordana because he believes she is lower than him on the social totem pole. He mentions that she is “moderately unpopular” while his “street cred” is already high (but could be higher). Petruchio knows that Katherine is rather wealthy. He chooses her not because she is lower than him, but  because she will make him richer.

In both the film and book, the men are taking control even before they are actually in their fantasized relationships. Neither Jordana or Katherine have given consent to the relationship. It has already been decided for them.  Both the Shrew and Submarine are reinforcing the idea that men are in control of the relationships they are in. However, the paths that Petruchio and Oliver take into getting the women to like are completely different. Petruchio initially starts out with kindness, which is painfully fake, and then immediately begins using force on Katherine. Olive however, never forces Jordana to do anything. He instead does everything that she wants him to do in order to get her attention and is kind to her despite her repeated rebuffs. Oliver and Jordana eventually end up in a relationship where he is mostly infatuated with her and she accepts his feelings as well. Oliver forgets his initial reason for wanting to date her and even ignores his friends that tell him to break it off. Katherine and Petruchio have a relationship built off of the greed of Petruchio and misery of Katherine. The contrasts between these two sets of relationships show that modern relationships are created with two consenting people and not force from another. Not only this, but that women have way more control over their relationships than they did in the past.

The moments in the movie that ensue after Oliver sees Jorana and tries to get her to date him is what adds the humorous aspect. While the viewer knows that Oliver is not experiencing the “love at first sight” trope, they still want to see what ensues afterward.

“Pluck up thy spirits. Look cheerfully upon me. Here, love, thou seest how diligent I am, to dress thy meat myself and bring it thee. I am sure, sweet Kate, this kindness merits thanks. What, not a word? Nay then, thou lov’st it not. And all my pains is sorted to no proof.”

Oliver’s ways into getting Jordana to love him varie. Throughout their relationship, he shows her kindness and understanding, much like Petruchio. However, the ways in which he shows this kindness are not fake. When Jorana realizes this, her tough exterior begins to soften, which deepens their relationship. 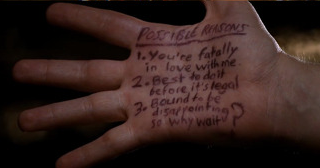 Oliver asks her to have sex with him, but Jordana asks for reasons why she should. Oliver writes on his hands three reasons, but Jordana ends up crossing off the first one which reads “You’re fatally in love with me”. Jordana knows that she likes Oliver, but she isn’t in love with him. Despite saying this, Jordana ends up having sex with him anyway.

In most modern day societies, many would agree that a man and woman in a relationship should love one another. In Jordana and Katherine’s cases, they aren’t in love with their significant others. Jordana may be technically Oliver’s girlfriend, but Jordana does not have as strong feelings for Oliver as he does for her. Jordana seems to like Oliver because of the things he does for her and the way he treats her. She doesn’t actually love Oliver as a person. This is why the relationship eventually falls apart. Jordana takes advantage of the fact that Oliver is in love with her and uses him to her full advantage. Thus proving that real relationships are built on true love and not force or manipulation. If Jordana existed during the Shrew’s time period, she most likely wouldn’t have had a choice of having sex with Oliver or breaking up with him. Unlike Katherine, who is ultimately forced to stay with Petruchio if she wants to live.

By the end of the movie, the similarities between Jordana and Oliver’s and Katherine and Petruchio’s relationships begin to split.  Oliver love for Jordana deepens while she continuously pushes him away. He sees that his parent’s relationship is falling apart and doesn’t understand why. Petruchio is able to further his agenda in taming Katherine, and eventually succeeds with a submissive wife and vast amounts of wealth to go with it.

Soon, when Oliver turns to Jordana for help, she is nowhere to be found except for a letter in the mail that detailed:

“Dear Oliver, I tried to tell you but I figure you'll only probably believe me if it's in writing. It's over. I enclose my lighter as a parting gift for you. Also, I think you should know, I've found someone else.” 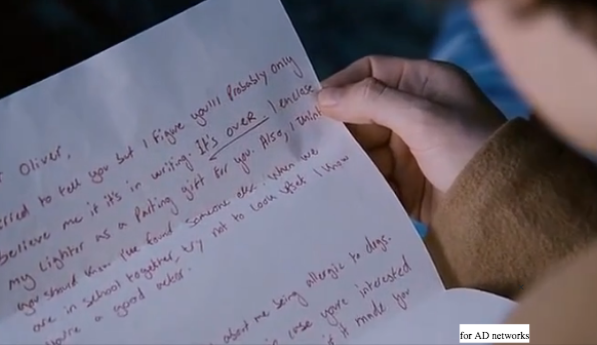 What duty they do owe their lords and husbands.”

With this, Katherine then gives a long speech about how women should obey and submit to their husbands.

By the end of the book, Petruchio claims his victory and Katherine accepts her fate as his wife. Oliver eventually accepts the fact that Jordana doesn’t love him and they decide to stay friends. The difference between these two conclusions is that the time period effect how everything is carried out. Katherine and Petruchio both know they did not love each other. Petruchio saw her has a prize to win and Katherine was forced into marrying him. During Shakespeare’s time, arranged marriages were common and women usually had no decision on who they were to marry. The marriages were not built on love, but on social status and survival (Petruchio wants to marry Katherine in order to gain wealth and raise his position in society, and Katherine is forced into marrying him in order to survive). When looking at Oliver and Jordana’s relationship, everything is flipped. Oliver initially wants Jordana to be his girlfriend as a means of social status as well. He even takes the same route as Petruchio and tries flattering Jordana from the beginning. But the difference is that these behaviors are apart of Oliver’s character and are therefore genuine. He genuinely falls in love with Jordana. But the relationship falls apart because Jordana is not in love with him.

The book the Taming of the Shrew and the film Submarine both present that relationships only work when both members love each other. Not only this, but that women have way more control in their relationships than they did before. Katherine does not have the choice to leave Petruchio, while Jordana does. Katherine and Petruchio’s relationship is forced while Oliver and Jordana’s ends because it is one sided love. Modern audiences would feel satisfied with the ending of Submarine because it shows that love is what holds two people together, not abuse or force. The four hundred year contrast between these two art forms present that society's views on relationships and women's roles have definitely changed for the positive.

Shakespeare, William, and Thomas Goddard Bergin. The Taming of the Shrew. New Haven: Yale UP, 1954. Print.