There’s Something About Men

“Taming of the Shrew” vs. “There’s Something About Mary”

In “There’s Something about Mary” and “Taming of the Shrew” they show some similar behavior from the men towards the women, Bianca and Katherine. For “There’s Something about Mary” the focus will be on the main male characters trying to get closer to Mary by “courting” her without her realizing. All of the men besides one lies to her about who they are so that she will like them more. In “Taming of the Shrew” Petruchio does this to Katherine. Petruchio courts Katherine by constantly complimenting her and saying things to get her to marry him. However, some of the things that Petruchio says isn't exactly true to his heart he is just trying to get what he wants which is money. Also in “Taming of the  Shrew” Tranio, who, pretending to be Lucentio, presents his own gift of books and a lute, in exchange for the permission to see and woo Bianca.  It's been 400 approximately years since taming of the shrew til now and men still think that showing a women that they are the man they want by courting and fighting is the way to go because of not so original ideas are drilled into our society.

Mary is the girl that almost every male character wants o be with. She is a kind hearted perky blonde with big blue eyes. Ted has known Mary since high school and has had a crush on Mary since then. Ted couldn't stop thinking about Mary so he hired a detective to find her and tell him what her life is like after college. Pat is the detective. When Pat first saw Mary it was clear that his intentions were not to tell Ted about what she looked like or what she did for a living. Pat told Ted that Mary was grossly overweight with many children, to discourage him from having any contact with her. Pat stalked Mary and then approached her and pretended to be the man the Mary described to her friends. Tucker was an architect, crippled, and just about everything else that he knew Mary was looking for. Later on in the movie Pat discovered Tucker was just a pizza delivery boy pretending to be crippled because he knew Mary had a sweet spot for the disabled because of her brother and he pretended to be an architect because after pretending to be learning that while going to the place Mary volunteers.

“Signor Hortensio, ‘twixt such friends as we Few words suffice; and therefore, if thou know one rich enough to be Petruchio’s wife— As wealth is burden of my wooing dance— Be she as foul as was Florentius’ love as old as Sibyl, and as curst and shrewd as Socrates’ Xanthippe or a worse, she moves me not—or not removes at least. Affection’s edge in me, were she as rough. As are the swelling Adriatic seas. I come to wive it wealthily in Padua; If wealthily, then happily in Padua.” (Act 1:Scene 2 Lines 62-73)

In this quote, Petruchio is talking to Hortensio about how his sole purpose of coming to Padua was to find a wife to wed. A wife that comes from money to be specific. He is saying that he does not care about personality, he doesn’t care if she is foul nor if she's old and unattractive he just cares about the wealth that his new wife would bring. Petruchio explaining that he would do anything to wed a women for their money is scary.

In this scene there is Ted trying to get the detective Pat to go spy on Mary for a little while to see what she has been up to. In this screenshot this is Pat agreeing to do what Ted has of him after a while of convincing. 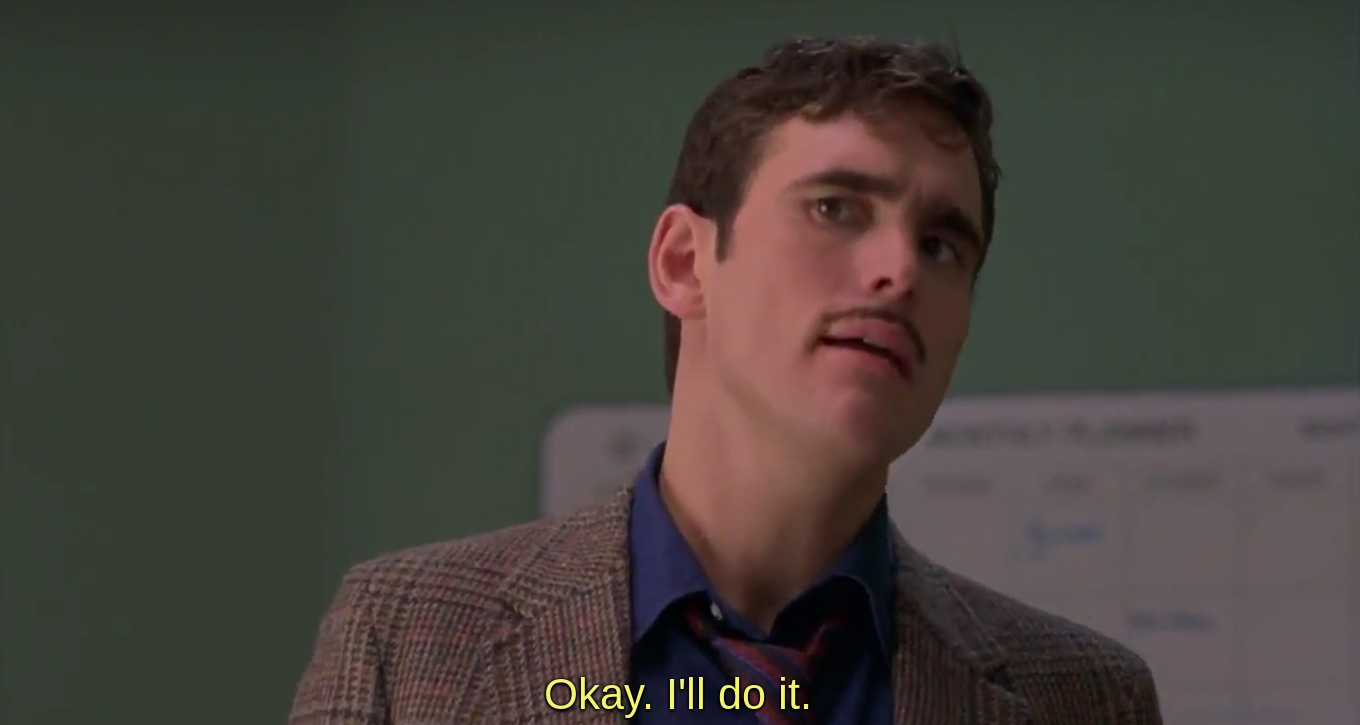 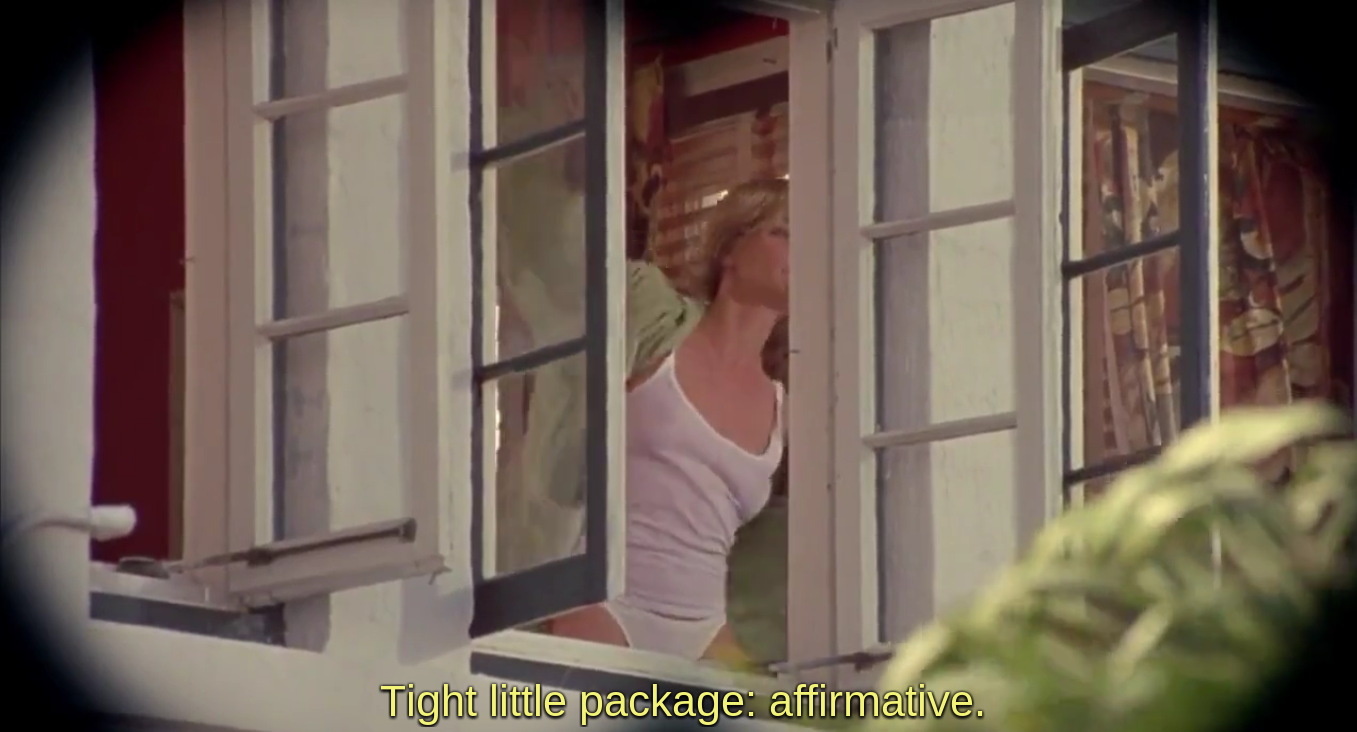 In this scene Pat is spying on Mary like he was hired to do. Before Pat did not really care who Mary was but now seeing that she is attractive he seems to have his mind set on one thing the, physical features of her body not caring about who she is as a person. This relates to Petruchio wanting to wed a woman in Padua for their money not really caring about who they are as a person. Both Pat and Petruchio has materialistic ulterior motives.

Hortensio: “Now shall my friend Petruchio do me grace and offer me disguised in sober robes to old Baptista as a schoolmaster well seen in music, to instruct Bianca, that so may, by this device at least, have leave and leisure to make love to her and unsuspected court her by herself.” (Act 1:Scene 2 Lines 131-138)

In this quote Hortensio is conjuring up a plan where he gets Petruchio to recommend Hortensio as a music instructor to Baptista for Bianca. Hortensio wants to use this tactic to get closer to Bianca. Hortensio is using the connection of other people and the knowing of Bianca’s needs for his own personal gain. The thing that he is trying to gain is Bianca’s hand in marriage. 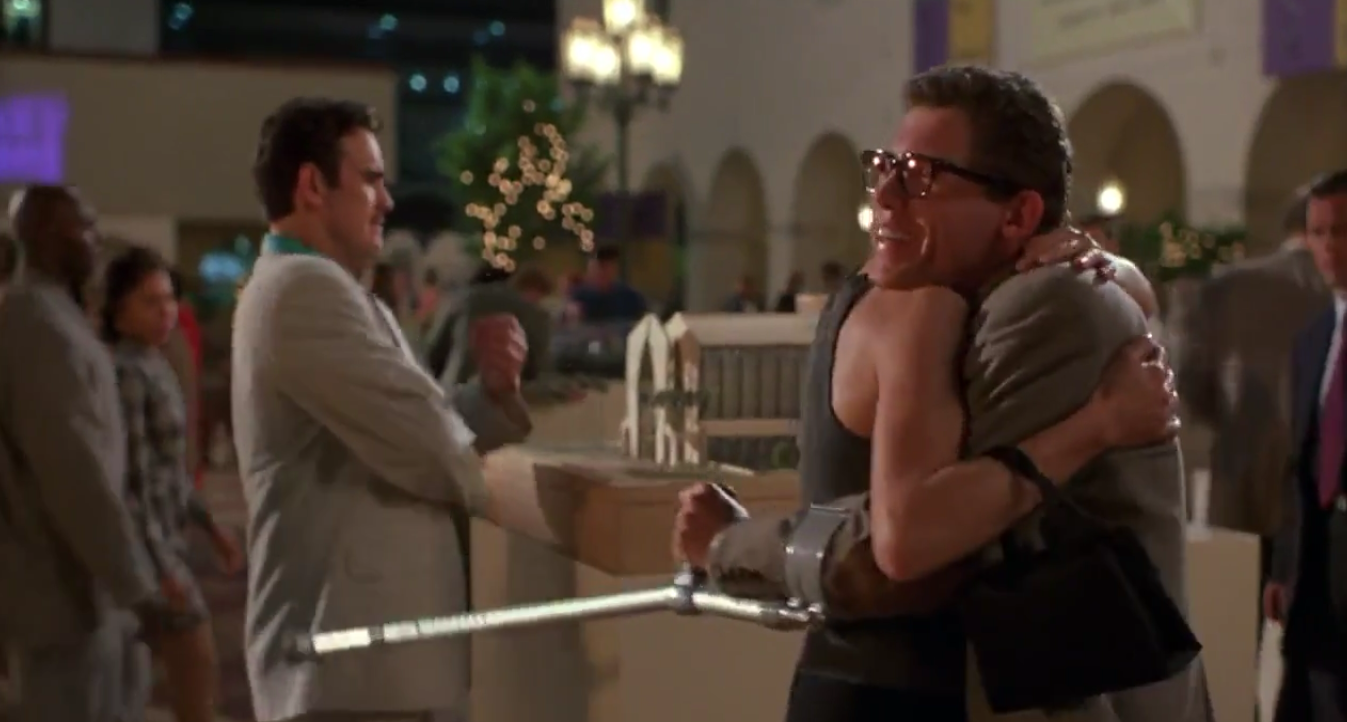 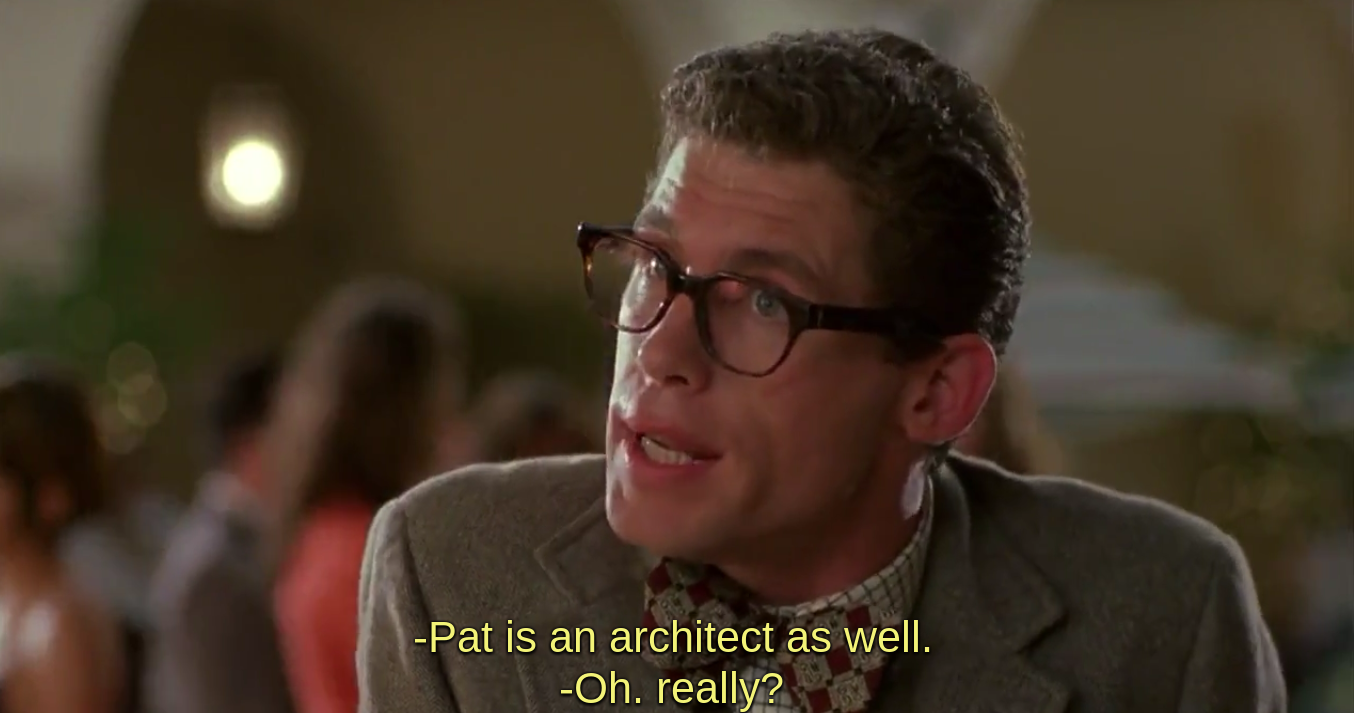 In a later scene Pat finds out that Tucker is a pizza delivery boy that is NOT crippled. So as you can see men will do just about anything to get the attention and affection that they want from the women that they desire not matter what it takes even if it means pretending to be the complete opposite of who they are. In Taming of the Shrew Baptista accepts the gift of offering a music instructor and then hears from Tranio, who, pretending to be Lucentio, presents his own gift of books and a lute, in exchange for the permission to see and woo Bianca. 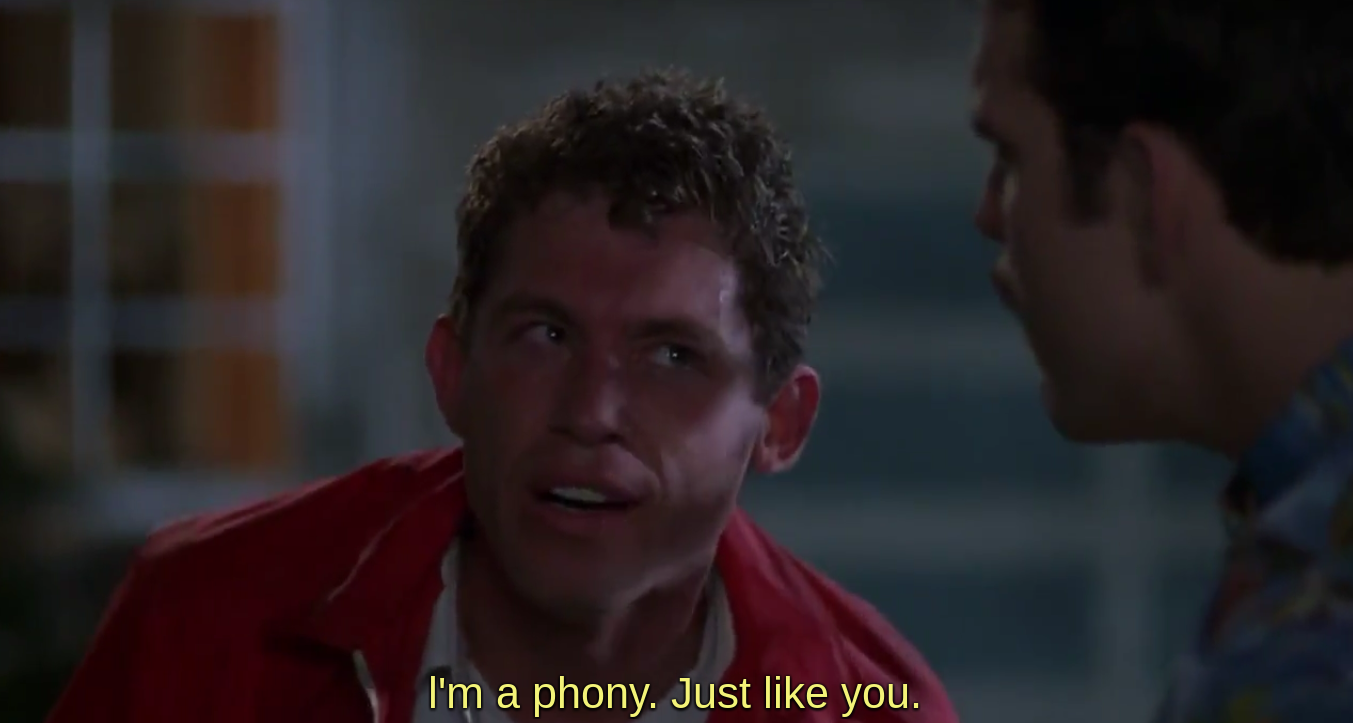 Since 1599 people have been sitting in watching Shakespeare plays. Some of these play are about to hetero sexual people who fall in love and do crazy things that take them out of their character. When people are exposed to images of love they then believe that that's what love is supposed to be like. However, that is not the case, but when someone like Shakespeare produces a play such as “Taming of the Shrew” then word gets around and the thoughts of what love should be like and what a relationship should be like spreads around and accumulates as the world goes on. Which means even carrying on to the year of 1998 which is when “There’s Something About Mary” came out. It eve carries out to today's current year, 2017. There are no original concepts of love because the entertainment industry and social media has corrupted it.