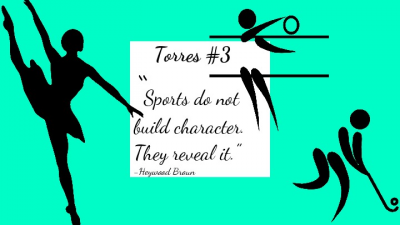 Why I had made my slide look the way it does is because it expresses the way I describe myself. I would describe myself as an athlete. So when you look at my slide it represents the certain sports I am the most proud of being able to be apart of. In  the center I had included one of my favorite quotes that represents me being a athlete. There was a couple things that influenced me while making my decisions on the slide. One of them was making sure I had only one point and not multiple things on the slide that would take me forever to explain. Another thing was the Size of the text and where the quote was positioned which was right in the center. I had placed it there because it would be the center of attention. My focus on my whole slide would be around that one quote. One of the major things that influenced my decision makings was the positions of my pictures used. The bigger the image the more it brings the attention which, was the dancer that bled of the page to show how that was the second biggest thing to look at on the slide. Then the other images are apart of my identity of myself but aren’t as valued. This is why I made my slide the way it looks.