For my You and the World project, I have been working on the topic of Affirmative Action. For those who aren't familiar, Affirmative Action is the process in which an establishment uses special precaution to create equality between all genders and races. Briefly, for my first blog post, I chose to focus more on the data and statistics that accompany Affirmative Action. Basically bringing out a lot of the actual solid facts that would be used to develop a more well rounded opinion. For my second blog post I chose to invest in a more different approach. Even though I had quality information I wanted to see how real people felt. With this I interviewed four different people, two students and two teachers, to discover their reactions and surprisingly, they were very similar. I found that a general idea was that Affirmative Action is not the best solution, but it's something needed in society at the moment. For my Agent of Change I decided to make a website dedicated to the central ideas of what Affirmative Action consist of and how it works. I did a website because it's something that will always be there, and it would be accessible to the masses. 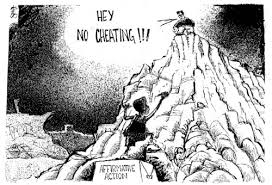 ( This is an image depicting what a large community of people would consider Affirmative Action to be.)

Before assembling my website I did more research to find if anything is being done in support or in opposition to this issue. I actually found that the main thing being done are protest. At first I didn't think it was that much for trying to fix this issue, but upon thinking about it it's a great idea since attention is being drawn. The more protest that are being done the higher the chances change will occur if there is constant pressure from the public. Look at Black Lives Matter who basically did the same things and are known throughout the nation. I think that is a great way for all of the people who want more attention on Affirmative Action to get it. The best source of change that can be done is to physically going out there and fighting for what you want. I'm in complete support of it.

Back to my own Agent of Change, my website was meant to be a site that would provide viewers with all sides of the Affirmative Action debate. From the time I spent researching, it was evident that most websites were trying to convince you whether Affirmative Action was completely great or should be abolished immediately, but this website more informative than persuasive. Readers learn the ins and outs of Affirmative Action while viewing all sides to help create their own depiction of it. This way a very good way to change this because I got to put some of my own opinion on it but mostly informing those who don't know much about this as to what it is because it's something that's often swept under the rug. I think this has been a good change as long as people are reading it. As long as people are reading it, informing themselves, and leaving with at least more knowledge or a better understanding of the topic it has been a good change because I'm helping those who don't know, know about it.

I feel that doing this project really brought everyone closer to the a certain community, and made them more involved with their issues. Because we have spent so much time working on these issues and learning so much about them we have a more personal connection to them, and even no more than what we did before. While we informed the public and our peers, we did the same thing to ourselves. I also learned that that we have a diverse group of people who are all affected or have a strong connection for a wide variety of things. Most importantly, I learned that my classmates as well as myself a willing to put the hard work in for something we believe in. If I was to do this project all over, I would have given myself more time to do some of the task before they were do. I handed everything in on time, but there were times when I was trapped for time because I procrastinated. The only things that seems to be left are to monitor what our Agent of Change has done to help or bring awareness, and to simply keep following it.

I really like how you concluded your entire 3 posts, and I liked how you came up with the website idea because social media is a outlet for all teenagers our age and even adults and that way you're reaching out to them.

I really like how you concluded your entire 3 posts, and I liked how you came up with the website idea because social media is a outlet for all teenagers our age and even adults and that way you're reaching out to them.

I was really interested in your project and the topic you chose. Have you been personally affected by affirmative action or know anyone that has? I think this is a topic that not many people tackle because of all the differing opinions that surround it and how much of a "racial issue" this takes on. I think that without your resources (i.e. blog posts, website) I would be somewhat clueless on this issue.