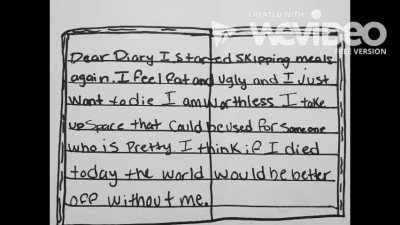 “Dear Diary, I started skipping meals again. I feel fat and ugly and I just want to die. I am worthless. I don’t deserve to live, I take up space that could be used for someone who is pretty and a better person. I think if I died today the world be better off without me…”

This is a diary entry I wrote. I never told anyone about this and I had never planned to. I guess it’s because I thought no one would understand. Now it’s time to try and make them understand.

Let me start by saying that the worst feeling in life is that death is the only way to rid yourself of pain. Once death resonates in your mind it never leaves. It followed me wherever I went and living with that burden is extremely hard to deal with. Constant questions swarmed my head. “When does the feeling go away? What did I do to deserve this punishment?”

I know these feelings all too well. I live through this nauseating pain of feeling like death is my only way out of the constant darkness I’m feeling. For a very long time, I wanted to hide from what I was feeling. I thought all the scary thoughts would go away and I would get better over time. Ignoring how I felt is something I did regularly. I didn’t want to acknowledge that something could be wrong with me. Thinking that there was something wrong with my mind made me on the edge and I thought I wasn’t normal. I am now a 16 year old junior in high school struggling to find reasons to live. My existence is something I constantly question. I always ask myself whether my life was worth living.

I recently tried to commit suicide and that lead to me being in a mental hospital. I have attempted suicide twice in my life and I never told anybody about the first one, until the second attempt happen. It was a normal day for some but for me, life was becoming a burden that I couldn’t carry around any longer. I took my brother to school and the whole time I had this empty feeling. I felt that I didn’t belong and overall, I was so exhausted with all the mixed emotions I had going on in my mind. I tried to jump in the train tracks but there was too many people around so I stopped myself. I was completely zoned out for the remainder of the day. I couldn’t focus in school and I didn’t know how to just come out and say I tried to kill myself. How do you do just tell someone, hey I feel like dying or I tried to kill myself today. I was a danger to myself and needed medical attention. I wanted to hide from these feelings and ignore them.  Last thing I thought about doing was explaining it.

I remember saying to my mentor Mr.Kay “I’m really scared of myself and I don't trust myself anymore. I’m afraid that I’ll do something to harm myself again…”

I  mustered up enough courage and told Mr.Kay, who then told Ms. Siswick, which lead to me being placed in a mental hospital. Going into the hospital I had no idea how to explain to my mom what was going on in my head, who was just hearing about my suicidal thoughts. I couldn't find the right words to describe my constant loneliness. Our conversation did no justice for me or her. It was something like

“ I just don’t feel important in life, like the world doesn’t need me.”

“I don’t understand why… like what made you feel this way?”

Frankly, I couldn’t explain what I was going through enough to where she would understand.  I came to the conclusion that no one will understand how feel. I started feeling angry with myself, because I couldn’t explain the thoughts that lead to my suicide attempts. Even now I don’t ever think I can come up with the right words to describe what my thought process was during my suicide attempt. In the hospital I thought maybe I could learn to better explain my feelings.

There's this stigma related to mental hospitals and it’s nothing like the movies say. There are no straight jackets or padded rooms. It’s like being in a college dorm that you can’t leave from. My first day there was a wave of questions. “Why are you here?”

“ How are you feeling today?”

“ How come you feel suicidal?”

Questions after question,  no matter how hard I tried, I couldn’t seem to answer any. There were kids there my ages, some younger and some older. The children in there were either there for anger or because they were suscial themselves. The suicidal ones understood my reasoning and I didn’t need to explain myself for them. They just knew the battle I was fighting. We were all fighting a battle with our minds. Nothing about it was like jail like people make it seem. You go to school you can have play time. There are groups that help with coping techniques. Being there was nothing like I expected it to be and I wasn’t going to hide being there from anyone.

Coming out of the hospital I tried so hard to explain what it’s like in a mental hospital and my reasoning for being there. Once again I realized that I could explain that process enough for them to understand. I felt like I just got done war and now I had to answer all these questions about it. How do people from war explain their experiences to others who have not gone through it. Reminds me of a book called “The Things They Carried.” The main character Tim and another character names Bartle go through something similar as me. Bartle has been through a lot and seen some pretty horrendous things and one doesn't want to talk about it and doesn’t know how to talk about. Tim has a hard time trying to explain what happen in the war and why it’s happening to people who don’t understand it. I feel like a war soilder who has fought a bloody and gruesome war, a war with oneself, and now has to talk about the details.

Just like these men I can’t seem to find the words to explain it to people who don’t understand death. I came to the conclusion that death becomes apart of everyone's life and in some extent we will all be connected by that. For people like myself,  death becomes your best friend and your worst enemy. It follows you and haunts you every single day. No matter how hard I try, I can’t seem to find the words to explain to people how my depression and suicidal thoughts take over me. I’m not sure, I have to though. I realized I was doing it all wrong. I don’t need for people to understand my situation. It was more so accepting it as being apart of me and knowing that yes,I am going through this and damn right it’s extremely difficult. No one knows what it’s like until they go through it. They can only sympathize with you and give you support. I realized I was looking for support from others and not for them to understand my situation.

1) I learned that Ty went through some traumatic experiences and she is still trying to sort through her thoughts. 2) One writing strategy that really drew me into the story and set the tone for the essay was the introduction paragraph. It was unique and really made you want to see what was going to happen later on in the essay. 3) I think the end of the video, when you add in photos of your friends and talk about your reflection. It is deep.

1) I've learned that you have been through difficult things but you are working through them to find happiness! 2) I liked your reflection. I thought that was a vital part of this essay and video. You reflected on what depression means for you now and how you are getting through it. 3) The video added more of the serious sadness that the essay runs on. I liked it.