When I was presenting my first slide, I learned that not a lot of things was supposed to be going on. I also learned that one thing had to be the center of attention and it could be simple but catchy. I made the choice not to include pictures because the main focus was the letter i, and if people’s attention was going to be focused on a picture, it would be taking away the purpose of the letter. I also chose to put a frame around the phrase because that was my way of trying to get my point across. I also chose to say “I can’t fit into one slide” because my life is too complex and it’s so much going on that one slide is not enough room to define who I really am. Research is so important when beginning a project. It sets a foundation and gives ideas for the direction you want to go in. There are tips and advice that can be given to you and you could actually learn from it. I suggest doing research before beginning a project so that you have a clear idea and foundation on what you want to do and what you’re supposed to be doing. 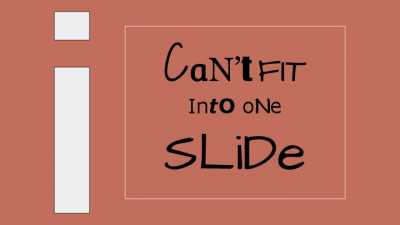