Control is the Key to Any Relationship

Clueless and The Taming of the Shrew

Love and its legitimacy has caused many debates over the years. Shakespeare's The Taming of the Shrew(1590s) shows how control has more to do with relationships than actual feelings. He shows this through the relationship between Petruchio and Katherine, which involves Petruchio consistently demanding that Katherine change her personality and agree to fictitious ideas just for the sake of saying he could do it. Katherine has to stay with him due to the pressure of the institution of marriage. Amy Heckerling's Clueless (1995) displays a similar relationship between characters Dionne and Murray, as Murray constantly disrespects and invalidates Dionne.

Although Shakespeare's work and Heckerling's film take place three centuries apart, the theme of control is prevalent in both portrayals of romantic love in relationships. In both relationships, the male is seen controlling their partner and showing disrespect. Murray does it by purposefully doing or saying things he knows Dionne dislikes, such as calling her 'woman', to get a reaction from her. Petruchio uses physical and mental abuse to force Katherine into a docile state. Not only does this show how men abuse their power in relationships, but also how women are pressured to stay in these relationships despite being mistreated, as Dionne and Katherine are. Both these texts show how societal pressures cause women to stay in toxic relationships, which in turn instills more power in men causing them to be more controlling.

“Katherine: Now must the world point at poor Katherine; And say ‘Lo, there is mad Petruchio’s wife, If it would please him come and marry her.’”

In this scene, Katherine is waiting for Petruchio on their wedding day. Katherine is telling her father, Baptista, about how she would be unhappy in their marriage if it happens. Petruchio not showing up on time to the wedding was one of the first things that he did to control Katherine and disrespect her. He knows that the wedding day is important to Katherine like many women during this time. Petruchio has power over her if he makes Katherine wait for him. He knows that Katherine would wait for him because she is pressured by her father and society to get married. Also, Katherine is fearful of the public option and how others would see their marriage. She doesn’t want people to think that she was left at the altar or marrying a mad man. In Clueless, Dionne also feels a social pressure to stay with her boyfriend who is not respectful. 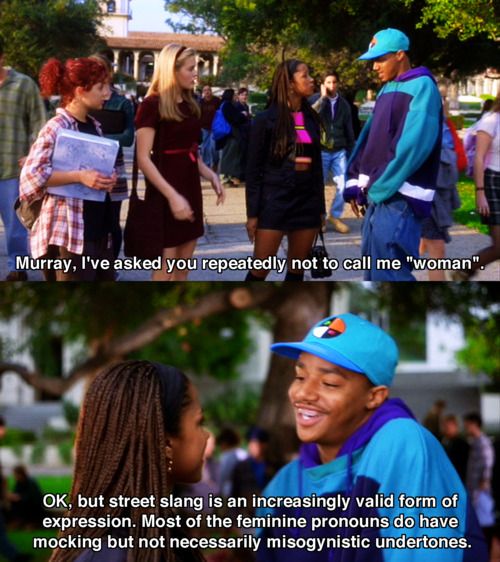 In this scene of Clueless, Dionne is talking to Cher about how Murray was constantly paging her over the weekend then Murray walks up to Dionne. He confronts Dionne about not answering his pager and calls her “woman.” The word “woman” is something that Murray knows Dionne dislikes, but he constantly says it throughout the movie. It is a way for Murray to control Dionne and make her feel like she doesn’t has a voice. The use of the word “woman” tells Dionne that she doesn’t have control over his words. Also, the word causes Dionne to have a negative reaction and get upset. Murray enjoys this reaction and attention that he gets from Dionne. Murray knows that he can disrespect Dionne in this way because he is popular and having a popular boyfriend is a status symbol for Dionne like many other girls in their high school. Dionne is willing to handle his disrespectful comments to keep her popular boyfriend. This is similar to the relationship of Petruchio and Katherine because Katherine is also fearful of public opinion and being alone.

“Petruchio: Now by my mother’s son, and that’s myself, It shall ne moon, or star, or what I list, Or e’er I journey to your father’s house. [To Servants] Go on and fetch our horses back again,-”

In this scene of Clueless, Dionne confronts Murray about cheating on her. Murray tries to convince Dionne that the hair that she found in her car belongs to her. However, Dionne knows that she doesn’t wear that type of hair. Murray tries to distort the truth just like Petruchio. Dionne, unlike Katherine, has more power in her relationship. This causes Murray to shift the focus on the hair found in the car to inferring that Dionne is moody or emotional because “it is that time of the month.” Instead of making Dionne believe in a lie like Petruchio did with Katherine. This reaction belittles Dionne and causes her to lose focus on the cheating. It rails the whole conversation and Murray doesn’t have to tell the truth. The rails of the conversation leave viewers feeling that cheating is a topic that is not that important. This scene reinforces the norms that “boys would be boys” and an angry woman must be on her period. These social norms create pressure for women to accept the disrespectful behavior of men. 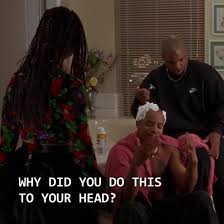 In this scene of Clueless, Murray and Dionne are at a house party. Dionne is running around for most of the party trying to find Murray. When she finds Murray, he is cutting all of his hair. He doesn’t let Dionne know about it. Murray is controlling Dionne by changing his image. He takes one of the most important things that Dionne cares about the public image by cutting his hair and embarrassing her. A bald head is something that Dionne doesn’t find cool or popular. Murray is cutting his hair two weeks before picture day. Murray shows Dionne that he has all the control in the relationship by cutting his hair and that he doesn’t care about the opinion of Dionne. This is similar to the scene with the dress and Katherine because it shows the male in the relationship taking away something that the female in the relationship wants. Petruchio takes away a dress from Katherine and Murray takes away a good image from Dionne.

In Clueless, the relationship of Dionne and Murray is toxic because of the controlling actions by Murray. Control is also the main reason for the toxic relationship of Petruchio and Katherine in The Taming of the Shrew. The idea that works three centuries apart can have very similar relationships shows that audience throughout the ages can relate to controlling relationships.

You were direct with your main points in the movie and how they connect back to the back the details are very well thought out as well. The way that you connected the movie the book was very well thought out. This essay changed my understanding since it gave me a better perspective on how men are controlling and allowed me to see parts that I would have never stopped to think about.

You were direct with your main points in the movie and how they connect back to the back the details are very well thought out as well. The way that you connected the movie the book was very well thought out. This essay changed my understanding since it gave me a better perspective on how men are controlling and allowed me to see parts that I would have never stopped to think about.

You did a really good job of showing how big of a role control plays in relationships. This changed my understanding of how women may become used to the control and just stay in the relationship because they think that the man should have control over them.

Overall, I like the essay because of how consistent it is. The first comparison struck out the most to me because I think it helped prove the thesis the most. Although Murray calls Dionne the word "woman" a lot without her approval, it is the subtly in the context that captivated me.