Wes Anderson is one of the most recognisable directors out there. His symmetrical style, consistent storylines, choice of color and sound set him apart from other directors and genres to the point where he is his own movie. I decided to imagine what it would look like if Anderson were to direct The Breakfast Club, the beloved film from the 1980’s about high schoolers spending a saturday in detention. I created the following presentation as an potential storyboard for the trailer combining some of the most well known scenes in the film with his directorial flair.

First things first, what would be a Wes Anderson film without Futura font? Parodied by Honest Trailers on Youtube, they pointed out that in every film Anderson has made, he has used that specific font which is true! Therefore, I presented the first slide as the actual title cards of the film. They are in Futura font and yellow, a color predominantly used by Anderson for his title cards. The rest of the writing throughout storyboard is also in yellow Futura font as to be consistent.

The second slide pertains to the opening of the film and has been redone to fit Anderson’s style better. In the original, the quote is said over different cuts of an abandoned school. Since in that time the five principal characters are introduced, I decided to mimic Anderson’s fondness for introducing characters via close ups. Instead of using an abandoned school, I decided to use close ups of each character's face as their stereotype is said and linger for a few seconds. The titling of the slide also includes, “Light background.” which is in reference to Anderson’s color choice, usually settling upon light pastel colors.

The third slide is supposed to be from when all the kids have arrived to detention and they are given a speech by Assistant Principal Vernon, hence the quote. Instead of having the kids all sit in different places and rows, I have organized them together looking up at the whiteboard in boy girl boy girl boy order, to fit as close to symmetrically as possible since there are only five characters. The whiteboard is off slightly from being center but only because I could not move the table over without bumping into the wall. As stated before, Anderson is noted for his use of specific types of color and in my interpretation that has not gone unnoticed. Three of the characters as well as the wall they face are different shades of blue which for this film will be the primary color palette.

On the fourth slide is the only deviation from the original film. There has been a whiteboard added with the word, “Detention” in big bold underlined letters. The idea is here is for a classic Wes Anderson wide long shot. This is what the kids are looking at after all so the camera would hold focus and not move for a good fifteen seconds, there would be a ticking clock in the background but otherwise silent.

For the fifth slide, we have Bill Murray as the assistant principal, so this would be a rare full body shot. Anderson does not normally use body shots but to satisfy symmetrical requirements, Murray’s hand is directly underneath his head on a straight line. He too is also dressed in blue, continuing the color theme for the film.

On the sixth slide of the trailer and just over halfway through, we reach the famous, “Eat. My. Shorts.” line. I set this up with another close up since it is a classic technique he uses, this time though not as close as usual. The background is meant to be a pastel color, most likely a light shade of green, still relating to the blue theme. The face of the “criminal” is centered symmetrically in the frame, because like most films and shots, Anderson emphasizes symmetry to a T.

Next we get to the seventh slide, or the dancing scene. In the original, it’s set to Karla DeVito’s “We are not alone” but in the Wes Anderson version there will be a different tune. Anderson is fond of classic rock songs, generally with guitar and not too loud so the choice of songs is quite numerous to be narrowed down.  The background is going to be a light pastel blue staying continuous with the early color theme. Occasionally Anderson makes a wipe cut where he takes a contiguous part, such as a facial expression or a person standing still, and then cuts to a completely different scene at which the facial expression changes or the person adjusts to their new surroundings. That is what happens here from the dancing to running in the halls, it's meant to be a seamless transition so when the characters dance off frame, they return in a new setting.

Slide nine takes place in one of the most poignant scenes of the original film where all the characters open up to one another and reveal something hidden about themselves to the others. This image is meant to be when the girl on the right says “When you grow up, your heart dies.” Though not symmetrical, the image represents a whip pan. A whip pan is where the camera is focused on an object or person then quickly whips to a new subject. When the whip pan is finished the girl on the right will be sandwiched between two boys, bringing back a type of symmetry close to Anderson’s style. Since the girl on the right is the “basket case,” the camera will pause and hold its position. This is intended to let an awkward silence linger over the characters, something Anderson does often to denote a bit of dry humor or moment where someone is out of place.

Lastly we finish with slide ten, a photo of “We are The Breakfast Club!!!” This sentence is ever so slightly paraphrased from the ending when assistant principal Vernon reads the essay written for him. Instead of him holding up the letter and reading it, we have him look down at the letter where we shift to the camera’s point of view. The camera then starts at the top of the page and pans down the paper as it read aloud and when the final words are read, the camera holds on the paper and lingers for a few extra seconds to accentuate the silence in the room where the kids once were. 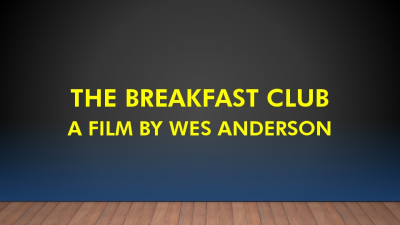