Hi my name is Alina Seing and for my English project, I will be researching about immigration. Immigration has been a big problem in our society and I think that it’s important to me too because I know many family members and friends who are immigrants that come from a different country to the United States. There are a lot of consequences for being an immigrant and there are a lot of dangerous things that could happen to them. One of the consequences of being an undocumented immigrant is that you get sent back to your country, you could never be able to see your family members again, and also get convicted of crime.

The reason why I chose immigration was because it is a big thing in our society. The reason why people come to America is because that want a better lifestyle. Their lifestyle is having to pay lower income tax, better jobs, equal payment as others, and being with family. Immigration is so important to them because it helps them learn new things such as the language that they speak and the way the society is. To be able to come to America, immigrants must have legal documents. If immigrants do not have any legal documents saying that they are allowed to come to the United States, then they are going to get sent back to the country that they came from or get sent to jail. I think it is important for immigrants to legally come to the United States because they want to have a new experience with society and a better opportunities. It is also important for immigrants to come to the United States because they want to be independant and find jobs that are secure enough for them to work in.

There are many problems with being an immigrant. If your are an immigrant, depending where you are at for example, Cubans come to the United States by train. They go through more than just bumpy roads, there are more than just a couple of families that want to immigrate so people fight for the room and sometimes people fall off from the trains to go to the destination they want to go. There are also a lot of people who need to go to bathroom and so they carry illnesses with them along with new ones. To come into the United States, you must have a green card, visa card, and a legal document. Once you have entered the United States, the first couple months are very isolated and unbalanced. The reason why it is unbalanced is because you must become an American Citizen to stay in the United States. If you don’t past your American Citizen test, you must retake it in the next year or you must get sent back to the country you are from or get arrested.

If you want more detail on immigration and how undocumented people back in the day, was able to pass, you can learn more from my annotated bibliography. 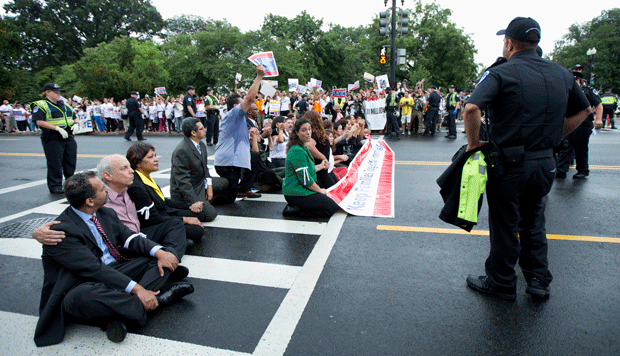 I love how you care so much about this. There is one typo where ''that'' is where ''they'' should be. But everything else is great and very helpful for someone who wants to find out more on immigration. Do you plan on using real immigration stories to help promote your cause? : )