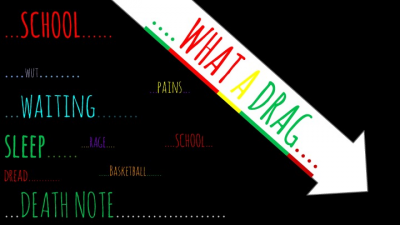 One of the problems in my last slide was the arrow that pierced through the slide, but too much so that it was said that the bleed had little effect. Additionally, it was said that the neon pink on the light gray wasn't the best choice. Therefore, I moved the arrow up a bit, changed the text appearing on the arrow to three different colors and Amatic SC font, I changed the arrow's color to a more pure white, and resized it accordingly.
In order to keep everything consistent, I changed the font of the other words to Amatic SC as well. Since the font was of a different height and width of the previous Syncopate font, I had to make every word bigger, thus leaving less room for some words. Therefore, rather than leaving it at six words on the left, I added (and changed some) words also following the pattern of contrast and ellipsis to make use of the blank space.
Speaking of blank space, I also changed the background to pure black, while not being among the advice given to me, was something I thought was necessary in order to complement the new structure of the slide. Another random thing I added was the phrase written on the arrow to ¨What a drag,¨ since I rather like that phrase.