My point of divergence was having Hitler dying from injuries he sustained in WW1 instead of losing a testicle like he actually did. The way I went about made the world change and excluded many of the really important events of the 1930-1940s. With Hitler gone, the Nazi Party never gains much power but instead the former central power countries (Germany, Bulgaria, Austria-Hungary, and Turkey) decide since they've lost so much as a result of the Treaty of Versailles, they should form a new empire with what they have. In doing this, the new empire is able to combine their remaining militaries and begin to take back the countries created from that said treaty. Eventually they conquer all of Europe and then the US. They were able to do this because the U.S. was in a state of turmoil because The Great Depression. Concerning America, any form of independence is lost once again, and America falls under another country's rule, much like the 1700's. A european influence is much more profound in present-day America.

I really did enjoy this project but at the same it was very stressful for me at certain points. Finding and creating the sources was fairly easy but putting them all together into a coherent project was really difficult. I felt like I was always leaving out a portion of history that seem vital to my project. Although on the other hand, I got to explore the causes of WW1, something I didn't really know. I learned that the catalyst for WW1 was assassination of the prince of the Austria-Hungary Empire: Archduke Franz Ferdinand by a Serbian Slavic Nationalist Gavrilo Princip. His death caused the empire of Austria-Hungary to declared was on Serbia, sparking WW1. It certainly shows that an individual's actions can effect history greatly. He didn't suspect Austria-Hungary to start an all out war, he simply doing what he felt his people needed. With the central powers combined they had no problems taking out defenseless countries.

I feel like this project could be really interesting if the scope of what 2011 would be like was a lot more global. I feel like if we didn't have to connect it back to America we can show how the entire world has been affected as well. If I were given the chance to re-do this project, I definitely would make my final product a lot more visual and interactive. I'd try to immerse the person looking at it into the history was created. 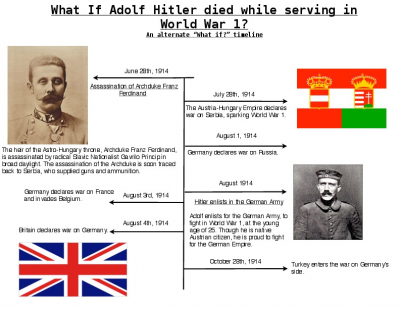